Munich talks resolve to cease hostilities within 'one week' 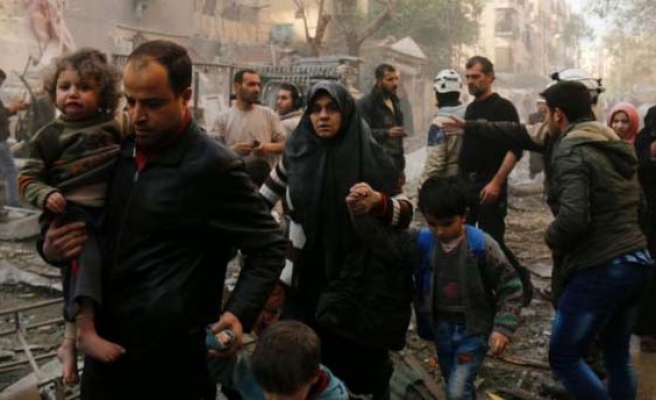 World powers on Friday agreed an ambitious plan to cease hostilities in war-racked Syria within a week and dramatically ramp up humanitarian access at talks in Munich aimed at reviving the struggling peace process.

The 17 countries agreed "to implement a nationwide cessation of hostilities to begin in a target of one week's time," said US Secretary of State John Kerry after extended talks co-hosted by Russian Foreign Minister Sergei Lavrov.

"Sustained delivery will begin this week, first to the areas where it is most urgently needed... and then to all the people in need throughout the country, particularly in the besieged and hard to reach areas," said Kerry.

The bombardments have forced 50,000 people to flee, left the opposition virtually encircled and killed an estimated 500 people since they began on February 1 -- the latest hellish twist in a war that has claimed more than 260,000 lives.

Kerry said talks between rebels and the regime would resume as soon as possible, but warned that "what we have here are words on paper -- what we need to see in the next few days are actions on the ground."

Host German Foreign Minister Frank-Walter Steinmeier agreed, adding that "whether this really is a breakthrough we will see in the next few days".

"When the whole world sees whether today's agreements are kept and implemented -- by the Assad regime and the Syrian opposition, by Hezbollah and opposition militias, and also by Russia," he said.

The atmosphere going into the talks had been gloomy, with Russian Prime Minister Dmitry Medvedev even warning of a "new world war" if Gulf nations sent in troops to support the rebel opposition.

But the working group emerged with a document that showed a surprising level of cooperation between the key players, despite rising tensions over Moscow's bombing campaign.

Lavrov called "for direct contacts between the Russian and US military" in Syria and said negotiations on a political transition "have to start as soon as possible, without ultimatums and preconditions".

Kerry said the cessation of hostilities -- an intentionally more tentative phrasing than a full ceasefire -- would apply to all groups apart from "the terrorist organisations" of the Islamic State (IS) group and Al-Qaeda affiliate al-Nusra.

A UN task force, co-chaired by Russia and the US, will work over the coming week "to develop the modalities for a long-term, comprehensive and durable cessation of violence," Kerry said.

Another task force will oversee the delivery of aid, including pressure on Syria to open routes, since only around a dozen of 116 UN access requests have been granted.

"This working group will meet tomorrow in Geneva," said Kerry. "It will report weekly on progress, or lack thereof, to ensure consistent and timely and approved access moving forward."

Russia, US at odds

Russia and the US remain starkly at odds on several issues, particularly the fate of Assad.

The two traded accusations on Thursday, with the Pentagon claiming Russian air strikes had destroyed hospitals in Aleppo and denying Russian claims that US planes had struck the city.

Syria is a crucial ally and military staging post for Russia and Iran, while observers say Moscow has benefited from the chaos created by the war, particularly the refugee crisis in Europe.

Washington, reluctant to involve itself in another complex war after the quagmires of Afghanistan and Iraq, has also faced criticism for not doing enough to help the rebels.

Instead, it has sought to focus more on combatting IS jihadists, which have taken over swathes of Syria and Iraq, than getting involved in the civil war between the regime and opposition forces.

"The US has given up the idea of toppling Assad," said Camille Grand, of the Foundation for Strategic Research in Paris. "Kerry seems willing to accept pretty much anything to resolve the crisis."