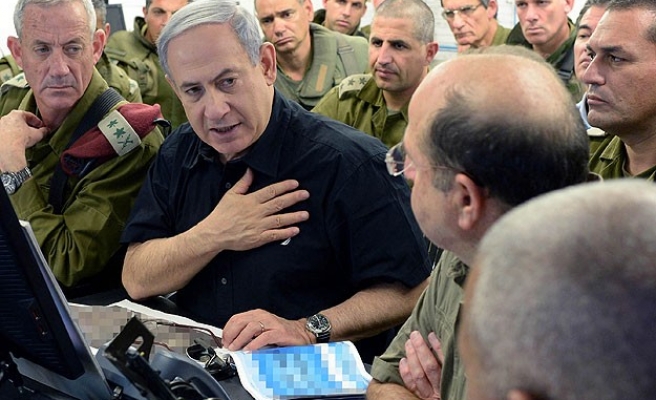 Israel sees in the Egyptian-proposed Gaza truce an opportunity to strip the Palestinian enclave of rockets but is prepared to redouble military action there if the cross-border launches persist, Prime Minister Benjamin Netanyahu said on Tuesday.

"We agreed to the Egyptian proposal in order to give an opportunity for the demilitarisation of the (Gaza) Strip - from missiles, from rockets and from tunnels - through diplomatic means," he told reporters.

"But if Hamas does not accept the ceasefire proposal, as would now seem to be the case, Israel would have all international legitimacy to broaden the military operation to achieve the required quiet."

Israel approved an Egyptian-proposed deal that would halt the week-old Gaza shelling war on early Tuesday but the Palestinian territory's dominant Hamas responded suspiciously, saying they had not been consulted by Cairo.

Hamas's armed wing vowed its attacks would "increase in ferocity and intensity" but Palestinian rocket salvoes waned ahead of the mooted start of mutual de-escalation at 0600 GMT.

Palestinian fighters fired rockets at Israel on Tuesday and a Hamas leader said the group was still undecided on whether to accept the ceasefire.

Rocket salvoes were fired at Israel after 9 a.m. and live television showed the Iron Dome anti-missile system intercepting several projectiles over the port city of Ashdod, where a factory was hit. Emergency services said no one was hurt.

Sirens sounded in other parts of southern Israel after what Channel Two television reported had been volleys of at least 10 rockets.

Israel said there had been two cross-border launches overnight that caused no damage, and that it had bombed 25 sites in Gaza. Palestinian medical officials said a 63-year-old man and a 52-year-old woman were killed - bringing the enclave's death toll to more than 182, most of them civilians.

At Israeli military headquarters in Tel Aviv, the security cabinet convened by Prime Minister Benjamin Netanyahu said it voted to approve the truce deal, minutes before it was to come into effect.

Amos Gilad, a senior Israeli defence official and envoy to Cairo, cast the deal positively, saying Hamas had been weakened by the air and sea bombardment of impoverished Gaza.

"Look at the balance, and you see that Hamas tried every possible means of striking at Israel while bringing great and terrible damage on its people, from their perspective," Gilad told Israel's Army Radio.

"The Egyptian proposal includes a halt to all kind of (military) activity," he said. "What this proposal, if it is accepted, means is that, willy-nilly, Hamas did not manage to make good on its intentions."

Sami Abu Zuhri, a Hamas spokesman in Gaza, said earlier on Tuesday that the group had not received an official ceasefire proposal, and he repeated its position that demands it has made must be met before it lays down its weapons.

Hamas's armed wing, the al-Qassam Brigades, rejected the reported text of the truce deal, saying: "Our battle with the enemy continues and will increase in ferocity and intensity."

In what may have been an effort to upstage Cairo's mediation, three rockets were launched from the Egyptian Sinai at the southern Israeli resort of Eilat, wounding four people, Israeli officials said. They said the salvo was likely fired by fighters hostile to Israel and the Egyptian government.

Under the proposal announced by Egypt's Foreign Ministry "de-escalation arrangements" would take effect at 0600 GMT, pending implementation of a full truce within 12 hours after.

High-level delegations from Israel and the Palestinian factions would hold separate talks in Cairo within 48 hours to consolidate the ceasefire with "confidence-building measures".

The Arab League said in a statement it welcomed the Egyptian initiative "to protect the lives of the innocent."

Palestinian President Mahmoud Abbas, who reached an agreement with Hamas in April that led to the formation of a unity government last month, welcomed the proposal and urged its acceptance, official Palestinian news agency WAFA said.

Israel had mobilised tens of thousands of troops for a threatened Gaza invasion if the rocket salvoes persisted.

"We still have the possibility of going in, under cabinet authority, and putting and end to them (the rockets)," Gilad said.

Egypt suggested a full ceasefire could be in place by 6pm on Tuesday, to be followed within 48 hours by separate talks between the two sides and neutral mediators to discuss a longer-term agreement.

A statement from the Egyptian foreign ministry called on "Israel and all Palestinian factions to immediately enforce a ceasefire, in view of the fact that escalation and mutual violence … is not in the interest of either party".

Both sides, it said, should stop "hostilities … via land, sea and air". Israel should refrain from a ground invasion as part of its military offensive, and Palestinian factions in Gaza should refrain from firing rockets, attacks on borders or targeting civilians. Crossings should open to allow the movement of people and goods "once the security situation becomes stable on the ground".

Ismail Haniyeh, Hamas's political leader in Gaza, suggested in a televised speech that Hamas could be open to negotiations. "We are at an important stage in struggle against the occupier," he said, reiterating Hamas's demand for the release of its members in Israeli jails, including those arrested in a "recent sweep" in the West Bank.

Other Hamas officials said only a fully fledged deal to end hostilities would be accepted. One told Agence France-Presse that no agreement had been reached despite the Egyptian proposal. "There are efforts and communications on the issue of a truce deal but until now there is nothing final … Efforts are being made by various parties, particularly the Egyptians, but in a weak manner," he said.

Hamas leaders have also said a ceasefire must include an end to Israel's blockade of Gaza and a recommitment to a truce reached in an eight-day war there in 2012. Hamas also wants Egypt to ease restrictions at its Rafah crossing with Gaza imposed after the military toppled president Mohamed Mursi last July.

But the Egyptian proposal made no mention of Rafah or when restrictions might be eased. It said only that "crossings shall be opened and the movement of persons and goods through (them) shall be facilitated once the security situation becomes stable on the ground".

Hamas has faced a cash crisis and Gaza's economic hardship has deepened as a result of Egypt's destruction of cross-border smuggling tunnels. Cairo accuses Hamas of aiding anti-government militants in Egypt's Sinai peninsula, an allegation the Palestinian group denies.

Hamas has said it wants the release of hundreds of its activists arrested in the West Bank while Israel searched for the three missing teens. The detainees include more than 50 Hamas men freed from Israeli jails in a 2011 prisoner exchange.

The proposed truce made no mention of the detainees in stipulating that "other issues, including security issues, shall be discussed with the sides."