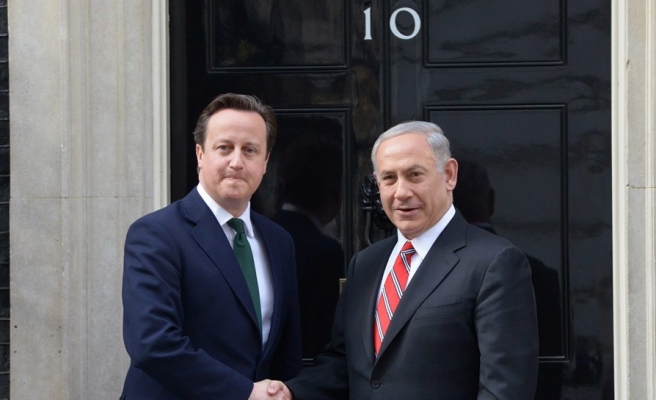 Israeli Prime Minister Benjamin Netanyahu, who is treated as "war criminal" by many Britons, sought UK's cooperation to "turn back the tide of militant Islam" as he met Prime Minister David Cameron in London on Thursday.

"The Middle East is disintegrating under the twin forces of militant Islam: The militant Sunnis led by ISIL and the militant Shiites led by Iran," said Netanyahu as he began talks with Cameron at Downing Street.

"And I believe that we can cooperate in practical ways to roll back the tide of militant Islam both in the Middle East and in Africa altogether."

Three things were on the agenda at the talks, according to Netanyahu: security, peace and technology.

The Israeli leader said he was willing to "immediately" resume negotiations with the Palestinians, "with no conditions whatsoever".

He also indicated he wanted increased cooperation with Britain on cyber-security, adding, "if we pull our resources together we can offer a better future and great prosperity."

Netanyahu's visit was preceded by clashes between pro-Palestinian and pro-Israeli protesters outside Downing Street on Wednesday.

Police intervened to break up the scuffles as vast number of protesters gathered, waving placards and flags.

More than 108,000 people have signed a petition urging Netanyahu's arrest for war crimes, enough for the issue to be considered for debate in Britain's parliament.

Israel's embassy in London called it a "meaningless publicity stunt".

Britain is pushing for a two-state solution to resolve the Israeli-Palestinian conflict and "will reinforce this message to Mr Netanyahu during his visit," according to an official response to the petition.

As he touched down Thursday in the British capital, Netanyahu turned his attention to the Iran nuclear deal agreed with western powers in July.

"All responsible countries must cooperate in order to stop Iran's terrorism and aggression which, to my regret, will only increase as a result of the agreement," Netanyahu said.