"I will not rest until I procure the advanced weapons needed to hit back at Assad and his allies. ... I give myself one month to achieve what I am intent on doing," Jarba said. 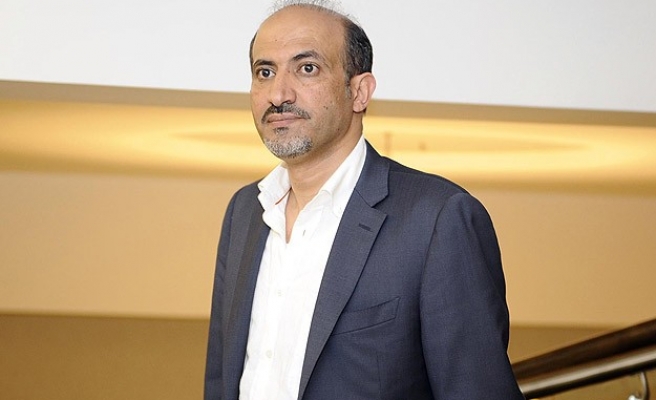 Ahmad Jarba, who has close links to Saudi Arabia, told Reuters in his first interview since being elected president of the coalition on Saturday that the opposition would not go to a proposed peace conference in Geneva sponsored by the United States and Russia unless its military fortunes improve.

"Geneva in these circumstances is not possible. If we are going to go to Geneva we have to be strong on the ground, unlike the situation now, which is weak," Jarba said on Sunday after returning from the northern Syrian province of Idlib, where he met commanders of rebel brigades.

Asked if shoulder-fired weapons that could blunt President Bashar al-Assad's massive advantage in armour and air power would reach the rebels after Saudi Arabia took a lead role in supporting the opposition in recent weeks, Jarba said: "We are pushing in this direction."

"I think the situation is better than before. I think these weapons will arrive in Syria soon," he said.

"My priority (is) to secure two-tier support for the Syrian people: military and humanitarian. We are working on getting advanced and medium-range weapons to the Free Syrian army and the liberated areas," he added.

Jarba offered Assad's forces a truce for the duration of the Muslim holy month of Ramadan, which begins on Tuesday, to stop fighting in the besieged city of Homs, where Sunni Muslim rebels face a ferocious ground and air onslaught by Hezbollah-backed troops and militias loyal to Assad. There has been no indication that the government is ready to accept such a truce.

Homs, 140 km (90 miles) north of Damascus, is situated at a strategic crossing linking the capital with army bases in coastal regions controlled by Assad's Alawite sect, an offshoot of Islam that has dominated majority Sunni Syria since the 1960s. Assad's forces have been seeking to establish an axis linking the capital to the Alawite coast.

"We are staring at a real humanitarian disaster in Homs. Assad, whose military machine was on the verge of defeat, has been propped up by Iran and its Hezbollah proxy," Jarba said.

The coalition's meeting over the weekend resulted in an overhaul of its leadership and a power shift in favour of a Saudi-backed wing, which defeated in a series of elections a faction effectively headed by Mustafa al-Sabbagh, a businessman who is Qatar's point man.

Jarba won with a razor-thin margin in a runoff ballot against Sabbagh. But the Sabbagh faction suffered a rout in elections late on Sunday for a new coalition politburo.

Born in the northeastern Syrian province of Hasaka, which is inhabited by Arabs and Kurds, 44-year-old Jarba belongs to Shammar, a large Arab tribe that extends into Saudi Arabia and Iraq. He was a political prisoner for two years in the 1990s.

He was also arrested during the uprising against four decades of family rule by Assad and his late father, which erupted in March 2011. Jarba fled to Saudi Arabia, a Sunni state that is leading support for the Syrian opposition and backed Jarba against Qatar's Sabbagh.

During his time in Saudi Arabia, Jarba joined the Syrian National Coalition and worked on refugee relief work and later military aid for the rebels.

He is close to Michel Kilo, a Christian opposition campaigner who has spearheaded efforts by the Sunni-led opposition to garner the support of minority groups fearful of an Islamist takeover.

"I will not rest until I procure the advanced weapons needed to hit back at Assad and his allies. ... I give myself one month to achieve what I am intent on doing," Jarba said.

After meeting a delegation from Homs, Jarba donated $250,000 of his own money to support humanitarian relief efforts in the city. Activists who met Jarba said the remaining rebellious Sunni neighbourhoods in Homs could fall in days.

Jarba was speaking in Istanbul after a meeting of the Syrian National Coalition, which has little physical presence in Syria and little influence over militant Islamist brigades that play a major role in the fight against Assad's forces.

More than 90,000 people since have been killed since March 2011, making the Syrian revolt the bloodiest of the Arab Spring uprisings against entrenched dictators.