Munich deal may collapse soon if Assad regime and its allies, Russia and Iran, do not comply with it, Washington-based experts predict 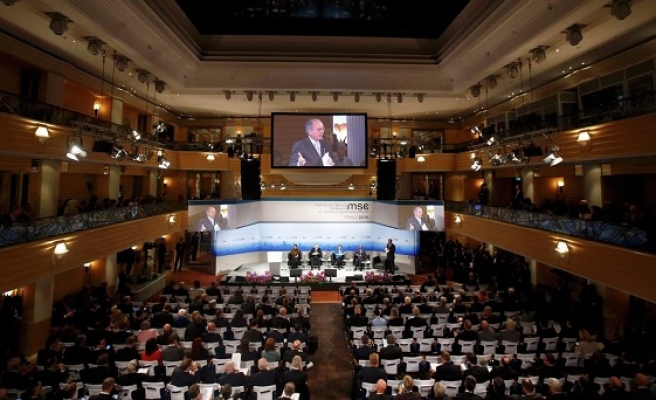 The recent “cessation of hostilities” agreement over Syria may end up as just words on paper if the Bashar al-Assad regime and its allies, Russia and Iran, do not comply with it, Washington-based experts say.

The U.S., Russia, Iran, Saudi Arabia, Turkey, Germany and France as well as several other regional and global powers’ top diplomats made the deal between the regime and opposition groups in the German city of Munich on Thursday, which allows humanitarian aid to reach hundreds of thousands of people under siege in Syria.

In the past, several deals on Syria have failed prompting words of caution from experts about the new agreement.

U.S. Secretary of State John Kerry said in Munich on Thursday: "As of now, the Feb. 11 agreement is no more than words on paper."

Kerry added: "What we have here are words on paper. What we need to see in the next few days are actions on the ground".

Experts put the onus of any possible failure over the deal on the Assad regime and its allies Iran, Russia and Hezbollah.

"Left to its own devices the Assad regime would maintain the sieges. The burden for ensuring its compliance with the agreement arrived at in Munich falls squarely on Russia and Iran," Ambassador Frederick Hof predicted.

According to Hof, who is also a senior fellow at the Washington-based Atlantic Council, Russia and Iran have the ability to push Assad to lift sieges.

But he noted "whether or not they do so depends not on 'words on paper,' but their calculation of the political risk their client [Assad] would be running by acceding to UN Security Council demands".

Daniel Serwer, a professor of conflict management at the Johns Hopkins School of Advanced International Studies and Washington-based Middle East Institute expert, said that Kerry went to Munich to get a "cease-fire", but he could only get a "cessation of hostilities", which implies a "less legal status" and "less permanence".

However, according to Serwer, the outcome was predictable in terms of freezing the gains of Assad regime and its allies Russia and Iran in and around Aleppo; thus, Russian and Iranians may at some point challenge the deal.

The Syrian regime forces have encircled the opposition stronghold over the last week thanks to heavy Russian airstrikes.

"There is no neutral party to monitor the implementation," Serwer added. "Even if the moderate forces represented in the High Negotiation Commission, which gave a nod to the deal, restrain their cadres, there are lots of other fighters all over Syria, including extremists associated with the Islamic State and Al Qaeda who are uninterested in stopping the hostilities," he said.

"It would be surprising if an agreement built on such shifting sands were to last more than a couple of weeks," he said.

He added that logistical advantage lies with the regime and thus next round of talks whenever it takes place is "likely to find the opposition at an even greater military disadvantage".

Aaron Stein, a resident fellow at the Atlantic Council, also agreed that the deal will not take long to collapse but according to him the cessation of hostilities was indeed crafted in a way to "allow humanitarian aid access to besieged areas" rather than a halt in the war.

"The grey areas come about when Russia says it will continue to target terrorist groups," Stein added. "It is not clear how Russia defines that and it would not be in the interest of the United States to define terror groups inside Syria outside of Jabhat al-Nusra and Islamic State,” he said, using an alternative name for the ISIL group.

Several attempts by the UN have so far failed to make a progress in finding out a solution to the five year civil war.

According to the UN, the Syrian civil war has so far claimed the lives of at least 470,000 people and caused more than 10 million people to flee their homes.

The tragedy of Syrians is compounded by the rise of ISIL in the war-torn country. Moreover, the UN estimates that even if the war ends now in Syria, it will take around 30 years to rebuild it.