Brahimi said, on Saturday that while in New York he wanted to urgently clarify what support the United Nations can offer him to ensure his mission has a better chance of success. 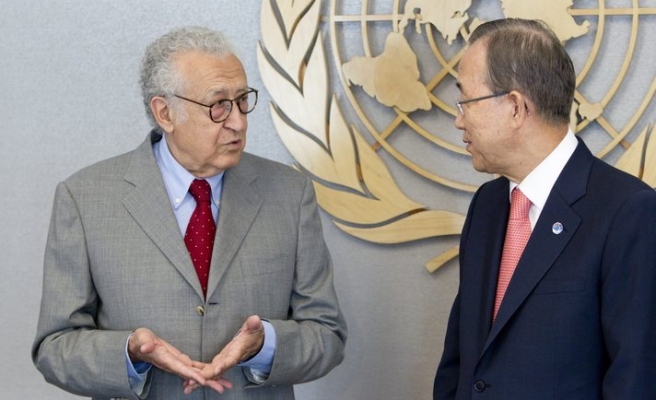 Brahimi met with Ban for the first time since agreeing last week to replace Kofi Annan at the end of August as the United Nations and Arab League joint special representative on Syria.

"Secretary-General, when you called me I told you that I was honored, flattered, humbled and scared and I am still in that frame of mind," Brahimi told Ban, when the pair met in New York.

"The Syrian people, they will be our first masters. We will consider their interests above and before anyone else. We will try to help as much as we can, we will not spare any effort," he said. "Let's try and see what we can do."

Brahimi, who hesitated for days before accepting the job that France's U.N. envoy Gerard Araud called an "impossible mission," was meeting with various U.N. officials on Friday to discuss plans for a fresh approach to the Syria conflict, which the United Nations says has killed over 18,000 people.

"Your (Brahimi's) leadership will be very important, you have the full respect and full support of international community. It is crucially important the Security Council, the whole United Nations system (is) supporting your role," he said.

Annan, a former U.N. secretary-general and Nobel Peace Prize laureate, is stepping down after six months as the international Syria envoy because he said his peace plan was hampered by a divided U.N. Security Council.

Annan was especially frustrated by the deadlock between the five permanent council members.

Russia, backed by China, repeatedly vetoed Western- and Arab-backed resolutions that criticized the Syrian government and threatened it with sanctions, saying the United States, Europe and Gulf Arabs were seeking regime change.

Brahimi told Reuters in an interview on Saturday that while in New York he wanted to urgently clarify what support the United Nations can offer him to ensure his mission has a better chance of success.