New UN Syrian envoy hopes to succeed where others failed

UN representative is cautious about a new peace proposal after the failure of two plans authored by his predecessors. 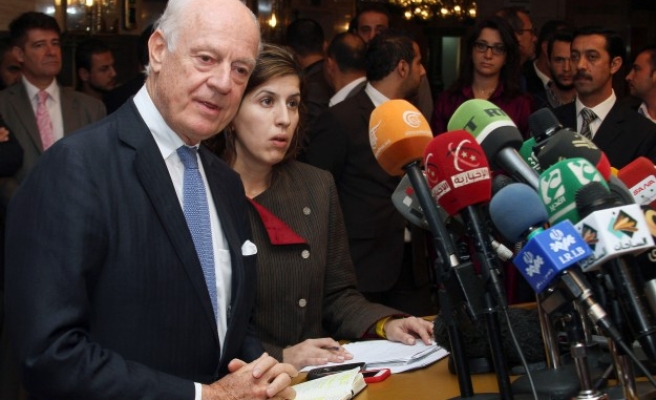 It is arguably the most difficult job in world diplomacy.

The United Nations special envoy for Syria has been a position associated with moribund peace efforts to halt the more than three-and-a-half years years of fighting in the country.

This is possibly why "concrete" and "realistic" are two of the words the current holder of the post, Steffan de Mistura, most frequently uses when speaking about his "action plan" to resolve the most violent chapter of the Arab Spring.

The veteran diplomat was appointed to the positon in July, succeeding Lakhdar Brahimi and Kofi Annan, who had both also served as joint UN-Arab League envoys. De Mistura reports only to the UN because of the deep divisions in the Arab world over Syria's future.

So far he has opted to use cautious language while talking about the prospects of peace, stressing that a plan he recently proposed is not yet a full-fledged peace plan.

His "action plan," presented Oct. 30 to the Security Council, envisages establishing incremental zones to "freeze" the fighting and create an environment whereby humanitarian aid could reach the beleaguered population of Aleppo.

A week after proposing it to the council, he visited Damascus and discussed it with officials of the regime of embattled President Bashar al-Assad, who called the proposal "worth studying."

"My meetings here with the government and with President Bashar al-Assad gave me the feeling that they are studying very seriously and very actively the UN proposal," de Mistura told reporters Tuesday.

The plan is aimed at three basic points.

“One is the need to focus on the real threat of terrorism as defined by the resolutions of the Security Council. Second is to reduce violence ... Three, through the reduction of violence, try to reach as many people as possible in Syria and outside Syria who have been suffering due to this ongoing conflict; and through that, hopefully facilitate it and use that as a building block in the direction of a political solution.”

The conflict in Syria, which began in March 2011, has claimed more than 150,000 lives, and nearly 11 million people are in need of humanitarian assistance inside the country, according to the UN.

The unrest created by the civil war paved the way for extremist movements, such as ISIL, to gain a foothold in the region.

Aleppo remains besieged on one side by the regime, on another side by ISIL militants, and by Jabhat al-Nusra on other. All this while the opposition faction Free Syrian Army controls some key neighborhoods.

De Mistura addressed why he choose Aleppo as the starting point for his plan. "Because Aleppo and the city is not far from a possible collapse and we need to stop that from happening; and because Aleppo is iconic, a symbol of culture, of multiculture and of religious and historical heritage in Syria."

In February 2012, former UN Secretary-General Kofi Annan was appointed Joint Special Envoy for Syria by the UN and the League of Arab States. His core diplomatic effort focused on delivering to the regime a six-point proposal for ending the civil war, a plan endorsed by the Security Council.

The proposal laid upon the regime to take significant steps, including ending all fighting operations. The government formally accepted the plan, but continued its attacks on rebel forces and civilians.

Annan announced his resignation six months later in August 2012, citing a lack of unity and political will among world powers to resolve the conflict. He called the peace mission a "mission impossible."

He was replaced by Algerian mediator Lakhdar Brahimi in September 2012.

Brahimi’s peace plan included organizing the Geneva Conference on Syria and facilitating the intra-Syria talks earlier this year. Those two rounds of talks, the first in January followed by a second in February, saw the Assad regime and opposition representatives sticking to their positions, and yielded only modest cooperation on a humanitarian issue related to aid access in the long-besieged Old City of Homs.

The basis of the talks was full implementation of an action plan adopted in the so-called Geneva Communique of 2012, the first international conference on the conflict, which called for a transitional government to lead to free and fair elections.

Brahimi resigned in May following the failure of the peace talks, voicing regret for his inability to ensure a coherent international response to the humanitarian crisis.