The Al-Qaeda-affiliated group said that Mohamed Hamiyah had become the "first victim of the Lebanese army's obstinacy after it fell under the influence of [Lebanese Shiite militant group Hezbollah]." 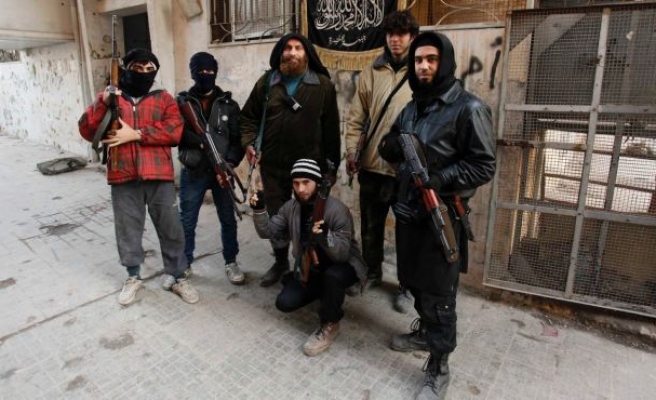 A leader of the Al-Nusra Front in Syria's Qalamoun border region has confirmed the execution of a captured Lebanese Shiite soldier after the group hinted earlier Friday that it had killed him.

Mohamed Hamiyah was "executed with one shot to the head," the source, who asked not to be named, told Anadolu Agency.

The source added that the killing had come in response to the recent shelling of Nusra Front sites near the border by the Lebanese army.

Earlier in the day, the Al-Qaeda-affiliated group said via Twitter that Hamiyah had become the "first victim of the Lebanese army's obstinacy after it fell under the influence of [Lebanese Shiite militant group Hezbollah]."

The front went on to accuse the Lebanese army and Hezbollah of staging a bomb attack earlier Friday on a Lebanese army vehicle in the northern Lebanese town of Arsal.

Three soldiers were killed in the attack and three others injured.

Al-Nusra said the attack aimed to derail ongoing talks between it and the Lebanese authorities and provide a pretext for more arrests in the town.

In early August, Al-Nusra – one of several militant groups fighting the Syrian regime – captured 18 Lebanese troops in Arsal during clashes with the Lebanese army.

Three days ago, Al-Nusra said that Hamiyah – a Shiite – "could be the first to pay the price" for stalled negotiations with Beirut over a proposed prisoner exchange deal.

The group went on to accuse both the Lebanese government and Hezbollah of intentionally hindering the talks.

One Al-Nusra leader recently said that the front would not release the captured troops until Lebanon's Hezbollah had withdrawn all its fighters from Syria.

In March, 25 men and women held by the Syrian regime were handed over to the Al-Nusra Front in exchange for 12 nuns abducted three months earlier in a deal brokered by Qatari and Lebanese mediators.

A leader of Syria's Al-Nusra Front has denied that the militant group's conditions for releasing 18 captured Lebanese soldiers include the release of group members held by the Syrian regime.

"Our conditions are realistic and easy to implement," the group leader – who hails from the Syrian border town of Qalamoun – told Anadolu Agency in a conversation online.

The Al-Nusra leader, who previously said he had articulated the group's demands to Qatari mediators, said the latter had yet to respond.

"We want to end the issue without the interference of Hezbollah," he said, referring to the Lebanese Shiite movement that is fighting alongside the Syrian regime.

He reiterated Al-Nusra's charge that Hezbollah was actively sabotaging talks with Lebanese authorities for the soldiers' release.

"[Hezbollah] is directing its MPs and military officials to pressure the government… to derail negotiations for the release of [Al-Nusra militants] held in [Lebanon's] Roumieh Prison," he said.

"[Hezbollah] isn't holding any of our members so why should we negotiate with it," he added.

He claimed that Al-Nusra had captured a number of Hezbollah "spies" who had confessed that they had been sent to shoot at Lebanese troops in Arsal and thus foment clashes.