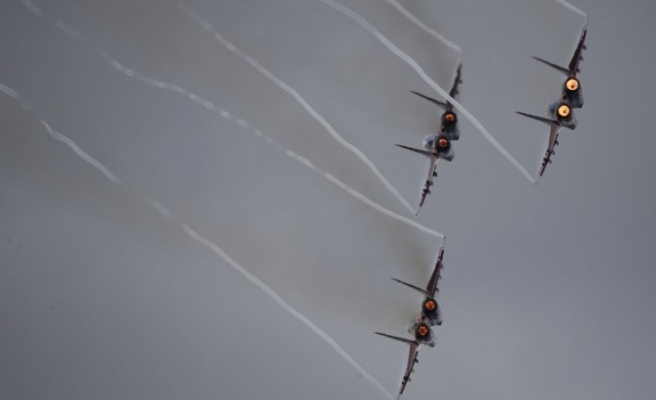 The spokesman for Al-Qaeda's Syrian affiliate, Al-Nusra Front, his son and 20 other extremists were killed in air strikes Sunday in the northeast of the country, a monitor said.

Abu Firas al-Suri was meeting with other leading fighters in a Nusra stronghold in Kafar Jales when the raids struck, the Syrian Observatory for Human Rights said.

"Abu Firas al-Suri, his son and at least 20 extremists of Al-Nusra and Jund al-Aqsa and extremists from Uzbekistan were killed in strikes on positions in Idlib province," its chief Rami Abdel Rahman said.

It was not immediately clear if the raids were carried out by Syrian regime warplanes or their Russian allies.

Syrian Suri, real name Radwan Nammous, fought against the Soviet forces in Afghanistan where he met Al-Qaeda leader Osama bin Laden and his mentor Abdullah Azzam before returning to Syria in 2011, according to supporters on Twitter.

A temporary ceasefire between government forces and rebels has largely held since February 27, but it does not cover Al-Nusra Front and the ISIL group.

The break has, in fact, allowed Russia and the U.S.-led coalition that has been bombing ISIL in Syria to concentrate their fight against the extremists.

On Wednesday, a drone strike near ISIL's de facto Syrian capital Raqa killed Tunisian commander Abu al-Haija, according to the Observatory, the latest in a series of blows to the extremists in recent weeks.

Fifteen ISIL commanders accused of revealing his position have since been executed by the extremists, and the fate of another 20 men accused of collaborating with the U.S.-led coalition remains unknown.

"This is the highest number of executions of security officials by ISIL," said Abdel Rahman, whose Britain-based group has a wide network of contacts across the country.

Regime troops on Sunday also seized the city of Al-Qaryatayn, one of the last ISIL strongholds in central Syria, according to state television.

The Observatory reported violent clashes in the city during the day, but by evening the monitor said ISIL extremists had finally been driven out.

The advance came after the Syrian army dealt ISIL a major blow on March 27 by retaking the ancient city of Palmyra, known as the "Pearl of the desert".

The recapture of Al-Qaryatain, some 120 kilometres (75 miles) to the southwest, allows the army to secure its grip over the ancient city, where extremists destroyed ancient temples during their 10-month rule.

Once Al-Qaryatain returns to government control, "of the whole of Homs province, ISIL will only hold its bastion in Sukhna" northeast of Palmyra, Abdel Rahman said.