OIC Secretary General Ihsanoglu said two members from Egypt's National Council for Human Rights met Friday night in Cairo with deposed President Mohamed Morsi, who has been kept by the army at an undisclosed location since his ouster on July 3. 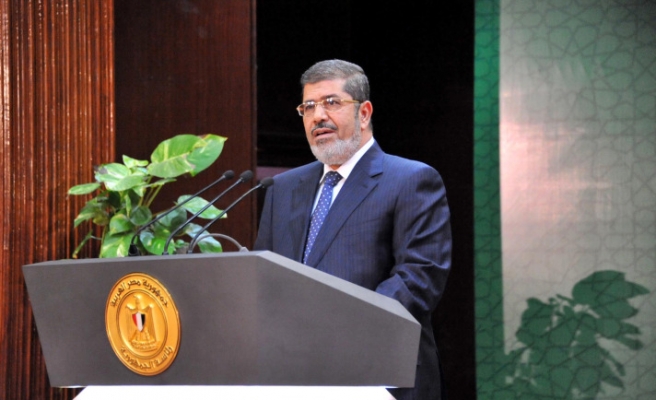 Organization of Islamic Cooperation Secretary General Ekmeleddin Ihsanoglu said two members from Egypt's National Council for Human Rights met Friday night in Cairo with deposed President Mohamed Morsi, who has been kept by the army at an undisclosed location since his ouster on July 3.

The announced meeting becomes the first one which elected President Mohammed Morsi, who is currently detained, was permitted to have with civilians after being ousted by the Egyptian military on July 3 and being held captive at an undisclosed location.

Ihsanoglu could not provide information about where the meeting had been held.

Speaking to the Anadolu Agency (AA) about Friday's massacre in Cairo's Rabaa al-Adawiya, Ihsanoglu said he talked to Egyptian Foreign Minister Nabil Fahmy a short while ago.

Ihsanoglu said he expressed his concerns about the events to the minister, and demanded information during their conversation.

Ihsanoglu reiterated the importance of inclusive dialogue and underlined that the spirit of reconciliation through observing calm and restraint should be the priority for all parties in Egypt.
In this context, he conveyed to the Minister that release of the former President would create an enabling dialogue environment.

The Foreign Minister thanked the Secretary General for his call and his sentiments for the Egyptian people. The Minister reiterated the government’s keenness in restoring stability in the country through reconciliation and briefed him about all the efforts that have been initiated by the government in this regard.

"He (Nabil Fahmy) told me that two members from Egypt's National Council for Human Rights met Mohamed Morsi. When I asked him about the content of the meeting, he told that a declaration soon will be made," said Ihsanoglu.

Pointing out that the OIC was closely watching the events since July 4, one day after the coup, Ihsanoglu said, "We announced our declaration against the coup on July 4. I talked to more than 50 ministers on July 8. I told them we do not accept this and condemn this. I told them that they should release Morsi, if not they should treat him in a good way."

Upon the question whether OIC would have a meeting over developments in Egypt, Ihsanoglu said such meeting required invitations by member countries, and added, "In case of such invitation, we will respond immediately."