Opposition to Morsi ouster up to 69 pct, study shows

The number of Egyptians opposed to the overthrow of Egypt’s president Mohamed Morsi has risen to 69 per cent over the last month, while 55 percent of those who support Morsi’s overthrow were affiliated with the toppled Mubarak regime, a study shows. 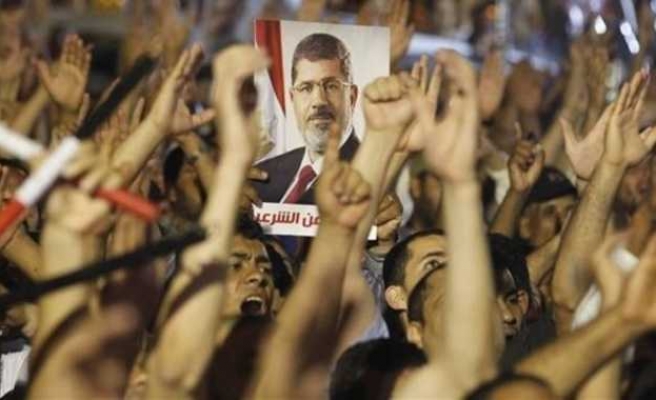 The number of Egyptians opposed to the overthrow of Egypt’s first democratically elected president Mohamed Morsi has risen to 69 per cent, according to a study addressed in a report in the Middle East Monsitor. The study indicates that only around 25 percent of Egyptians support his current detention, while 6 per cent preferred to not disclose their opinion.

The study conducted by the Egyptian Centre for Media Studies and the public opinion group Integrating Egypt is the second of its kind to be conducted since General Abdel-Fatah Al-Sisi, Commander in Chief of the Armed Forces, and various political and religious factions collaborated to depose Morsi in a military coup last month.

The study aimed to examine the critical group in opposition to President Morsi's detention and the trajectory of the level of support for the 2011 Constitution (approximately 78 per cent).

The study shows that only around 19 percent of those oppposed to Morsi’s detention are Muslim Brotherhood supporters, while thirty-nine percent of are affiliated with other Islamic factions and 36 percent do not affiliate with any political movements.

The liberal bloc and Christians constitute 6 per cent and 2 per cent of the study respectively.

The study also revealed that 55 percent of those who support Morsi’s overthrow were affiliated with the toppled Mubarak regime.

Among those who prefer not to express an opinion on the political situation, 91 percent affiliate themselves with the Nour party or some religious schools of thought whereas 9 percent do not have any political affiliations.

The study was conducted on August 1st and 2nd with the random selection of 3,911 individuals from different denominations and sects in Egyptian society.

Those opposed to the overthrow of President Morsi increased from 63 percent in July to 69 percent.

Those preferring to keep Morsi isolated decreased slightly from 26 percent in July to 25 percent.

The was a drop from 11 to 6 percent among those preferring to not express and opinion.

There was a 10 percent increase among those opposed to President Morsi’s removal.

The Middle East Monitor article notes that, with the 4 per cent decrease in support for President Morsi's isolation, the number of those who support his removal is approaching 25 per cent and the proportion of those opposed to amending the 2011 Constitution is approximately 22 per cent.

The report also elucidates that the qualitative distribution of the 69 per cent of Egyptians opposed to overthrowing President Morsi according to political orientation is broken down as follows:

• 19 per cent are affiliated with the Muslim Brotherhood or its political branch, the Freedom and Justice Party, and its political ideology. Many live in Lower Egypt and Greater Cairo.

• 39 per cent belong to Islamic political movements with ideologies and schools of thought aside from the Muslim Brotherhood. Many of these individuals live in the North or South of Upper Egypt.

• 6 per cent are liberals and practice independent professions such as medicine, law, accountancy and business. The majority live in the provinces of Upper and Lower Egypt and Greater Cairo.

• 36 per cent do not align themselves with any political parties, either organisationally or ideologically. Many were born into Islam and are by default practicing Muslims. They inhabit numerous Egyptian provinces and live in villages and hamlets.

• 2 per cent are Christians and belong to the Evangelical Church. The majority are highly educated.

Meanwhile the study conveys that the qualitative distribution of the 25 per cent of Egyptians in favour of overthrowing President Morsi according to political orientation is as follows:

• 55 per cent are supporters of Hosni Mubarak and the former regime. Many of them work in government or occupy government jobs. The majority live in Cairo and other provincial capitals.

• 19 per cent belong to liberal blocs and parties with liberal ideologies in general. Many live in Cairo and other provincial capitals.

• 17 per cent are Coptic Christians belonging to the Orthodox Church. This study considers them to be a political movement after many Egyptian Church leaders participated in removing President Morsi from office. They mostly live in Cairo, Minya, Beni Suef, Asslut, Sohag, Luxor, Alexandria, and Menouflia.

• 6 per cent belong to left-wing blocs and/or parties with leftist ideology. They mostly live in Cairo and other provincial capitals.

• 3 per cent do not align themselves with any political movements and live in all provinces.

Note that of the individuals who support the removal of Dr Morsi from his post as President of the Republic, 97 per cent have political and organisational affiliations. Seventy-two per cent of them are Christian or support the former Mubarak Regime, which reflects the same alliance between these two currents during the period of Mubarak's thirty-year rule.

The qualitative distribution of those who prefer to remain silent on the isolation of President Morsi, according to political orientation, is as follows:

• 91 per cent are affiliated to the Nour Party or agree intellectually with the ideological philosophy of the Nour Party. Many of these individuals live in Alexandria and the central and western Delta, while the rest live in various provinces around Egypt.

• 9 per cent do not belong to any political movement and are distributed among Egypt's numerous provinces, and live in a state of ennui and despair in regards to political life.

The study also draws attention to how the Nour Party and its Salafist sources lost many of its supporters and political authority over the course of the month.