The deposed president and 130 defendants are being tried of a mass jailbreak during a 2011 uprising that ended the 30-year autocracy of longstanding president Hosni Mubarak. 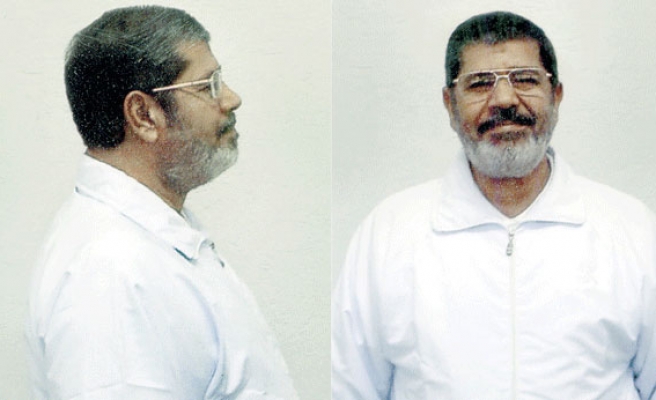 Ousted president Mohamed Morsi insisted during his jailbreak trial Saturday that he was still Egypt's legitimate president, condemning the trial proceedings as "invalid".

"I am Dr. Mohamed Morsi, the president of the republic," Morsi addressed the court judge, according to an Anadolu Agency reporter attending the trial.

He went on to describe his trial proceedings as "invalid".

The comments by the ousted leader drew applause from the other defendants who stood inside a sound-proofed glass cage.

Morsi renewed his call for veteran lawyer Mohamed Selim al-Awa to challenge the jurisdiction of the court to try him.

The deposed president and 130 defendants are being tried of a mass jailbreak during a 2011 uprising that ended the 30-year autocracy of longstanding president Hosni Mubarak.

The list also includes members of Palestinian resistance group Hamas and Lebanon's Hezbollah, whose names have not been disclosed.

According to the statement, 800 foreign operatives had crossed the border into Egypt's Sinai via underground tunnels along the border with the Gaza Strip during the January 2011 revolution, which ousted longstanding president Hosni Mubarak.

The statement said the operatives had attacked police and government facilities in Sinai, leaving several policemen dead, before moving to Wadi Natrun and Abu Zaabal prisons in northern Cairo and broke into them.