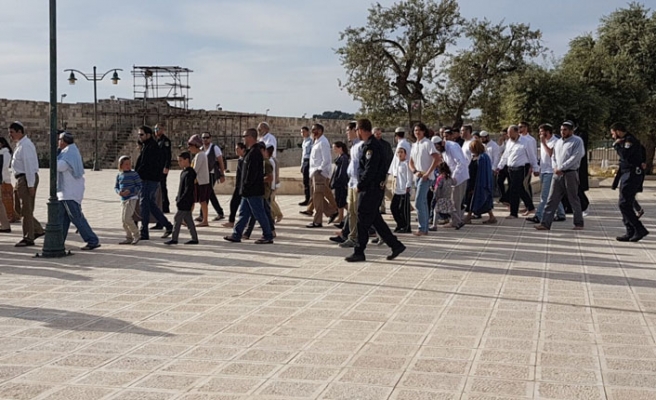 Hundreds of Jewish settlers on Wednesday forced their way into the Al-Aqsa Mosque compound in East Jerusalem, according to a Palestinian official.

“Divided into large groups, settlers forced their way into the compound through the Al-Mugharbah Gate and left through the Al-Silsila gate,” he said.

According to Kiswani, dozens of Israeli police officers were deployed in Jerusalem’s Old City and at the gates of the Al-Aqsa compound.

“Police restricted the entry of Palestinian Muslim worshipers into the mosque by confiscating their ID cards at the compound gates,” he said.

Since last Friday, over 2,000 Israeli settlers and policemen have entered the compound to mark the weeklong Jewish holiday of Sukkot, which will end on Sunday.

Tension has mounted in the Palestinian territories -- including occupied East Jerusalem, where the Al-Aqsa is located -- since U.S. President Donald Trump recognized Jerusalem as Israel’s capital earlier this year.

Israel occupied East Jerusalem during the 1967 Middle East War. It annexed the entire city in 1980, claiming it as the capital of the Jewish state in a move never recognized by the international community.