US reiterated its call for Israel to extend a partial freeze on illegal settlements as it said the Palestinians and Israelis began tackling "core issues" in new peace talks. 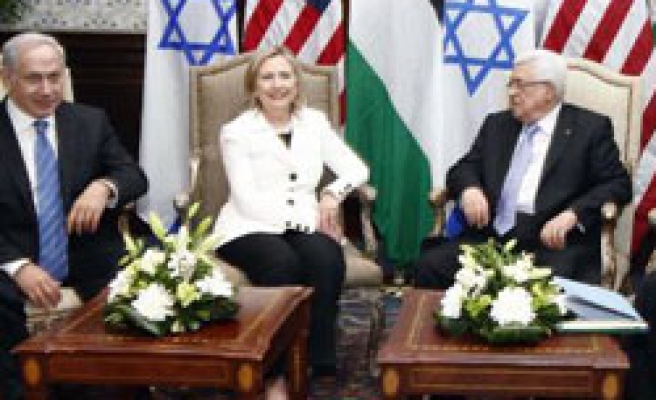 The United States on Tuesday reiterated its call for Israel to extend a partial freeze on illegal settlements as it said the Palestinians and Israelis began tackling "core issues" in new peace talks.

On her first visit to the Middle East since launching the talks in Washington on September 2, Secretary of State Hillary Clinton met Palestinian president Mahmud Abbas and Israeli Prime Minister Benjamin Netanyahu in the Egyptian Red Sea resort of Sharm el-Sheikh.

Abbas and Netanyahu shook hands and smiled for the cameras at the start of what US envoy George Mitchell said was a 100-minute meeting where the parties "began a serious discussion on core issues."

The core issues are the borders of a future Palestinian state, the fate of Palestinian refugees and the future of Jerusalem and Israel's security.

On her way to Egypt from Washington, Clinton repeated US President Barack Obama's call last Friday for Israel to extend the 10-month moratorium on illegal settlement construction that is due to expire later this month.

Mitchell said the US position on settlements is "well known and remains" unchanged.

"As president Obama said just recently, we think it makes sense to extend the moratorium, especially given that the talks are moving in a constructive direction," he said.

"We are all striving to bring the message to Netanyahu that the settlements issue is important to negotiations and for us there cannot be any talks on ending occupation while occupation is deepening," Palestinian negotiator Nabil Shaath said.

Netanyahu said on Sunday he would not extend the partial construction moratorium on the occupied lands.

"President Abbas and Prime Minister Netanyahu continue to agree that these negotiations, whose goal is to resolve all core issues, can be completed in one year," Mitchell told reporters in Egypt's Red Sea resort of Sharm el-Sheikh.

Clinton, Abbas and Netanyahu later convened for an unexpected second round of talks, this time with top aides present, after the first session broke for lunch.

Mitchell said negotiations would continue Wednesday in Jerusalem with Clinton's participation and Israeli and Palestinians teams would meet again "in the coming days" ahead of further talks at the leadership level.

"Today the parties have begun a serious discussion on core issues," Mitchell said.

"President Abbas and Prime Minister Netanyahu also reiterated their intent to approach these negotiations in good faith and with a seriousness of purpose.."

Neither leader made any immediate public comments at the summit, hosted by Egyptian President Hosni Mubarak. It was their first meeting since direct peace talks were relaunched in Washington on Sept. 2 after a 20-month hiatus, with a declared goal of achieving a framework accord in a year.

After Clinton completes talks in Jerusalem, Ramallah and Amman over the next two days, Mitchell plans to travel to Syria on Thursday and to Lebanon to continue work toward a wider peace, said a U.S. official who spoke on condition of anonymity.