Hamas, Islamic Jihad and the leftist Popular Front for the Liberation of Palestine (PFLP) groups separately described the attack as a "natural response" to "crimes" frequently committed by Israel 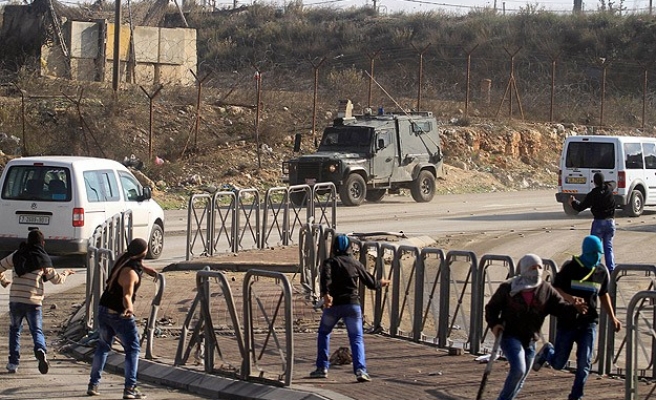 Several Palestinian factions cited Israeli "crimes" and "violations" against Palestinians and Muslim holy sites in the occupied territories as a reason for Tuesday morning's attack on a Jewish religious center that left four Israelis dead in West Jerusalem.

Hamas, Islamic Jihad and the leftist Popular Front for the Liberation of Palestine (PFLP) groups separately described the attack as a "natural response" to "crimes" frequently committed by Israel against the Palestinian population.

Earlier Tuesday, Israeli police shot dead two Palestinians who police say killed four Israelis and injured seven others in an attack with axes and a gun on a Jewish learning center near a synagogue in West Jerusalem's Har Nof district, according to the Israeli police.

"This heroic operation is a natural response to Israel's ongoing crimes against the Al-Aqsa Mosque [complex] and the [occupied] West Bank, as well as the [seven-year] blockade of the Gaza Strip," Hamas spokesman Sami Abu Zuhri said.

Abu Zuhri held Israel fully responsible for months of tension in Jerusalem, which in recent days and weeks has seen a spate of deadly Palestinian attacks on Israelis, along with violent clashes between Palestinian protesters and Israeli forces.

The Hamas has slammed the Palestinian Authority (PA)'s condemnation of the attack.

"The [PA's] condemnation of the Jerusalem operation is unjustified," Hamas spokesman Sami Abu Zuhri said in a brief statement.

Abu Zuhri argued that the PA's position on the issue "encourages [Jewish] settlers to commit further crimes against Palestinians in Jerusalem and the rest of the West Bank."

Islamic Jihad spokesman Dawud Shihab, for his part, described the ongoing upheaval in Jerusalem as a "genuine revolutionary intifada [uprising] in a natural response to Israeli policies" against Palestinians.

The PFLP also cited Israeli policies in Jerusalem as a reason for Tuesday's attack, which, the group said, were a natural response to the self-proclaimed Jewish state's "daily violations against the Al-Aqsa Mosque and Jerusalem and crimes committed by Jewish settlers against Palestinians in the West Bank and Jerusalem."

The Popular Resistance Committees and the Palestinian Mujahidin resistance faction also blamed Tuesday's attack on Israeli policies, with the former calling for stepped-up "resistance operations" against Israeli troops and Jewish settlers in Jerusalem and the occupied West Bank.

Meanwhile, Palestinians staged a rally in the Gaza Strip in support of an attack on a Jewish synagogue in West Jerusalem.

Protesters, many dressed in military fatigues, carried bladed weapons – which have been used in recent Palestinian attacks on Jewish settlers – and distributed sweets to passersby.

"We are here to show solidarity with the people of Jerusalem," Wael Abu Mohsen, one of the protesters, told Anadolu Agency.

"We are distributing sweets in celebration of this operation, which has gratified the people of the Gaza Strip," he added.

The attackers were identified as cousins Ghassan and Oudai Abu Jamal from Jabal al-Mukaber neighborhood.

No group has thus far claimed responsibility for the attack, which is the eighth to have occurred in Israel and the occupied territories within the last month.

According to witnesses, clashes erupted when Israeli troops stormed the neighborhood of Jabal al-Mukaber and shut all entries and exits of the district.

"Palestinian youths are hurling stones at Israeli troops while the latter fire stun grenades and teargas," one eyewitness told Anadolu Agency on condition of anonymity.

At least 14 youths suffered temporary asphyxiation due to excessive teargas inhalation, he added.

At least seven Palestinians were detained by Israeli troops during the violence, the witnesses said.

Luba Samri, a spokeswoman for the Israeli police, said in a statement that nine suspects had been arrested.

Six Israelis – including two security personnel – have been killed and several others injured in attacks by Palestinians since late October, amid markedly heightened tension which began with the abduction and murder in June of a Palestinian teenager in East Jerusalem by Jewish settlers.

Tension in the region reignited on October 30, when Israeli authorities closed access to East Jerusalem's flashpoint Al-Asqa Mosque complex for several hours after an extremist rabbi was shot and injured by a Palestinian man in West Jerusalem.

Following the shooting, Israeli troops killed the man in a raid on his East Jerusalem home, triggering violent clashes between Israeli forces and Palestinian protesters.