Thousands of Palestinians took to the streets across the Gaza Strip to celebrate a ceasefire deal between Palestinian resistance factions and Israel. 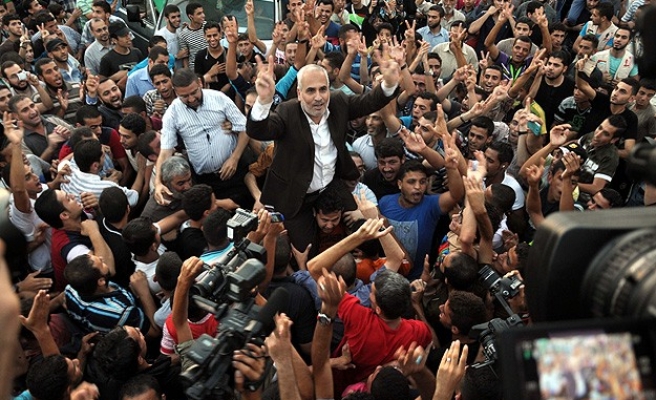 A ceasefire agreement between Israel and the Palestinians aimed at ending their seven-week conflict in Gaza went into effect on Tuesday and joyous Palestinians streamed into the streets of the battered enclave to celebrate.

Hundreds of Palestinians taking refugee inside the Shifaa hospital in the Gaza City fired firecrackers in celebration,  while others were seen distributing sweets.

An Egyptian-brokered ceasefire went into effect on Tuesday, bringing to a halt 51 days of relentless Israeli attacks on the blockaded coastal enclave.

Palestinian resistance factions, including Hamas and Islamic Jihad, have called on Gaza residents to go out into the streets to celebrate their "victory".

Egyptian Foreign Minister Sameh Shoukry said the deal called for the opening of all border crossings between the Gaza Strip and Israel, which would effectively signal the end of Israel's years-long embargo of the coastal enclave.

Under a second stage of the truce that would begin a month later, Israel and the Palestinians would discuss the construction of a Gaza sea port and Israel's release of Hamas prisoners in the occupied West Bank, possibly in a trade for body parts of two Israeli soldiers believed held by Hamas, the officials said.

Israel gave a low-key response to the truce, saying it would facilitate the flow of civilian goods and humanitarian and reconstruction aid into the impoverished territory if the "open-ended" ceasefire was honoured.

The United States urged both sides to comply with the terms of an agreement it hoped would "prove to be durable and sustainable".

"We view this as an opportunity, not a certainty," State Department spokeswoman Jen Psaki told reporters. "There is a long road ahead and we're aware of that, and we're going into this eyes wide open."

Palestinian health officials say 2,139 people, most of them civilians, including more than 490 children, have been killed in the enclave since July 8. Sixty-four Israeli soldiers and five civilians in Israel have been killed.

Thousands of homes in the Gaza Strip have been destroyed or damaged in the most prolonged Israeli-Palestinian fighting since a 2000-2005 Palestinian uprising. The United Nations has named a panel to investigate possible war crimes.

The Palestinian Center for Human Rights said 540,000 people had been displaced in the Gaza Strip.

"We have mixed feelings. We are in pain for the losses but we are also proud we fought this war alone and we were not broken," said Gaza teacher Ahmed Awf, 55, as he held his two-year-old son in his arms and joined in the street festivities.