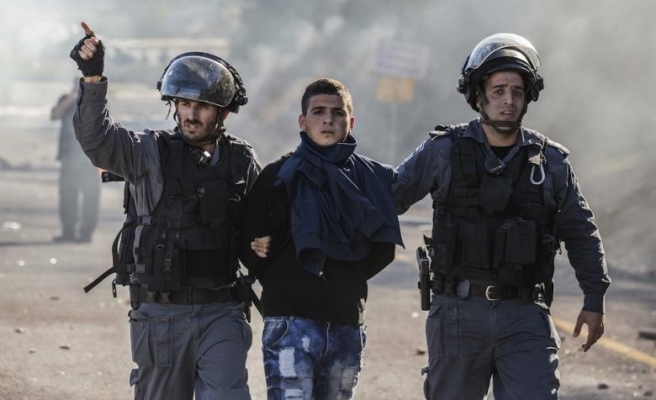 Palestinian officials and activists on Friday condemned a decision taken one day earlier by the Israeli Security Cabinet allowing Israeli troops to respond to Palestinian stone-throwers with live ammunition.

“Allowing the use of live ammunition against people armed only with stones is a flagrant violation of the most basic principles of human rights,” Ayman Odeh, head of the Arab Joint List in the Knesset (Israel’s parliament), told Anadolu Agency.

“This decision, which essentially gives Israeli troops a license to kill unarmed protesters and stone-throwers, will only lead to fresh cycles of violence,” he said.

Israel’s Security Cabinet on Thursday night unanimously approved a series of tough new measures -- including new rules of engagement -- to be taken against Palestinian stone-throwers.

One of these was to allow Israeli troops to open fire with live ammunition when the life of a police officer -- or a third party -- was deemed to be at risk by individuals throwing rocks, firebombs or fireworks.

“Israeli forces will be permitted to open fire -- and they will know they have the right to open fire -- in the event that lives are at risk,” Israeli Prime Minister Benjamin Netanyahu said in a statement.

Shawan Jabarin, head of Al-Haq, a Ramallah-based rights group, described the decision as “a blatant violation of the most basic tenets of human rights, which call for respect for peaceful demonstrations and the protection of civilian lives”.

The new rules of engagement, Jabarin added, “contradict the laws of peaceful protest and allow Israeli troops to murder any Palestinian deemed by police to be a threat.”

Palestinian rights groups, he went on to warn, “will not tolerate these racist actions against the Palestinian people; we will seek redress at international forums and rights organizations with a view to prosecuting Israel for its crimes.”

Hatem Abdel Kader, a senior official from the Palestinian Fatah movement, for his part, said the Fatah-led Palestinian Authority would not tolerate such “escalations” by the Israeli government against the Palestinian people.

“These measures reflect the racism of the Israeli occupation, which allows the murder of unarmed civilians,” Abdel Kader told Anadolu Agency.

“Netanyahu’s right-wing government approves laws that allow Palestinian blood to be shed in the [Israeli-occupied] West Bank and Jerusalem,” he added.

“We will not give in to these racist and unfair laws,” Abdel Kader asserted. “Nor will we tolerate Israel’s ongoing policy of demolishing Palestinian homes and confiscating Palestinian land.”

In its Thursday session, Israel’s Security Cabinet also decided to impose tougher penalties against those convicted of throwing rocks or firebombs at police, including minors and their parents.

“The Israeli cabinet has decided to impose minimum four-year jail terms for adults convicted of throwing firebombs, rocks or other objects, with a maximum sentence of 20 years,” Netanyahu said.