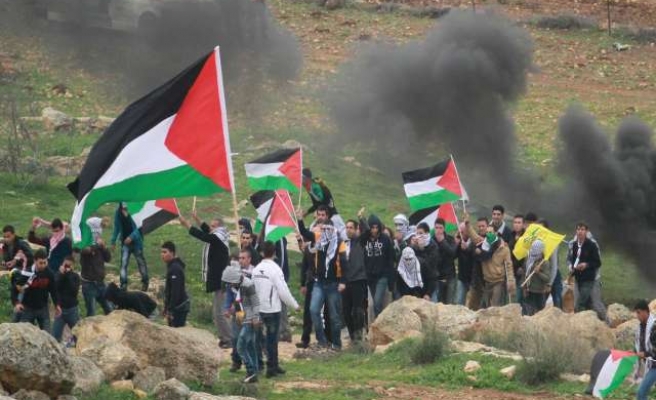 Holding a small wooden stick in one hand and a flashlight in the other, Akram Tayser keeps an eye on the movements of the Israeli settlers in Kasra town, south of Nablus in the West Bank.

Tayser said that he is one of the "night-guarding committees," recently formed by the town’s residents in order to address the crimes of Israeli settlers.

Accompanied by seven of his sons, all armed with the same tools, Tayser guards the town’s houses every night.

"Now we can confront any attack the settlers may carry out. Those people are cowards, they attack our homes targeting vulnerable families and remote houses, uprooting trees and burning vehicles," he said.

The Palestinian Authority has urged for establishment of people’s guarding committees to protect Palestinian towns from Jewish settler attacks.

There has been a recent increase in such attacks, most notably the burning to death of the Palestinian baby Ali Dawabsheh in Doma town, southeast of Nablus.

"The stick is to protect ourselves with and the flashlight is to light up in front of the settlers who sneak in at night to let them know that we are alert,” he said. “After discovering them they usually flee.”

He continued: "One phone-call is able to gather the whole town. We contact the president of the municipal council or the muezzin (the person who calls people to prayer) to inform the town’s people through loudspeakers to gather and resist the attacks."

Kasra has one of the highest rates of settler attacks of any Palestinian town.

According to Abdel-Azim Wadi, president of the town’s council, 64 attacks have been committed by Israeli settlers against the town over the past four years.

Israel has full civil and security control over Area C regions in the West Bank.

Wadi says that the guards are volunteers and take turns throughout the night.

"The settlers are cowards, they fear confronting us. They launch their attacks on remote areas and then they flee. Despite of having guns, they are cowards," he says.

"Look at the weapons we have: sticks, mobile phones and flashlights. But these weapons are much stronger than having guns because we are defending our land, homes and properties," he said smiling.

Four Jewish settlements have been built over the past ten years on Palestinian agricultural lands close to Kasra.

Surrounded by Israeli military forces, it is from these settlements that the settlers come and launch attacks against the Palestinians.

Kasra is only a few kilometers away from Doma, the town where baby Ali Dawabsheh was burned to death.

According to a local West Bank government official, the perpetrators of the attack came from a settlement built on land belonging to Kasra town.

Guarding duty begins at nine in the evening until morning the next day, with the volunteers taking turns to stay awake throughout the night.

Children between 10 and 15-years-old participate in guarding the town and have fun with their families.

Sulaiman Hannoon, 37, one of the guards, said, "My house was attacked and destroyed by Jewish settlers. But today the situation is different, they cannot enter our town – and if they did, they would not return safely."

Holding a stick in his hand, he said, "We are stronger than them. With our bare chests, we will face them."