Palestinian U.N. Ambassador Riyad Mansour told the U.N. Security Council that the international community was obliged to ensure protection of Palestinian civilians under the Geneva Conventions 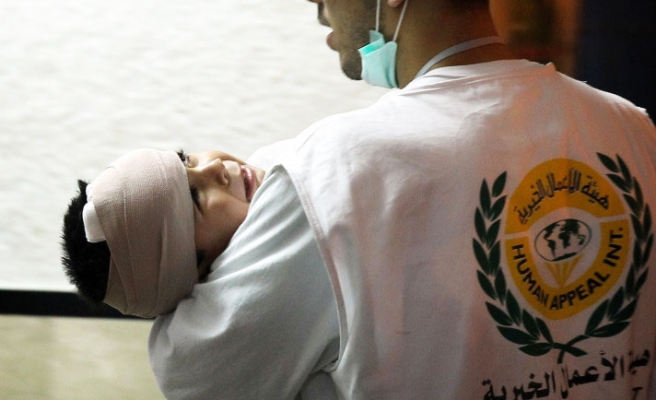 Palestinian U.N. Ambassador Riyad Mansour told the U.N. Security Council that the international community was obliged to ensure protection of Palestinian civilians under the Geneva Conventions on the conduct of war and occupations.

"Israel has clearly violated and abdicated its responsibility as an occupying power to ensure the safety and well-being of the civilian population under its occupation," he told a meeting of the 15-member council that Ban requested.

He said Palestinian President Mahmoud Abbas has asked Switzerland - as the depository for Geneva Conventions - to convene a meeting of the parties to the 4th Geneva Convention on the protection of civilian persons in time of war.

Israeli U.N. Ambassador Ron Prosor told the Security Council Israel was taking great measures to avoid harming civilians as it carries out a military operation "to remove the threat posed by Hamas by dismantling its military infrastructure."

At least 81 Palestinians have been killed in Israel's Gaza offensive, Palestinian officials said on Thursday, and fighters kept up rocket attacks on Tel Aviv and other cities in response.

Ban urged both sides to exercise maximum restraint, saying that "once again, Palestinian civilians are caught between Hamas' irresponsibility and Israel's tough response."

"I have consistently condemned indiscriminate rocket fire from Gaza into Israel. At the same time, the excessive use of force and endangering of civilian lives are also intolerable," Ban said. "I continue to condemn the rising number of civilian lives lost in Gaza."

The most recent hostilities were sparked three weeks ago by the kidnapping of three Jewish students in the occupied West Bank, who were later found dead. Then a teenage Palestinian was kidnapped and his burned body found in a Jerusalem forest.

Mansour said Palestinian officials want parties to the 4th Geneva Convention "to consider measures to uphold their obligations, under common Article 1 and Article 146 regarding penal sanctions for grave breaches, and enforce the Convention in Occupied Palestine, including East Jerusalem."

Article 1 relates to ensuring respect for the convention and Article 146 requires that the parties "undertake to enact any legislation necessary to provide effective penal sanctions for persons committing, or ordering to be committed, any of the grave breaches of the present convention."

The Palestinians acceded to the Geneva Conventions and 14 other international treaties and conventions earlier this year.

They were eligible to do so after the U.N. General Assembly upgraded the Palestinians' status at the United Nations in 2012 from "observer entity" to "non-member state," a move widely seen as de facto recognition of an independent Palestinian state.

The Palestinians could eventually join the International Criminal Court and lodge complaints against Israel for its occupation of lands seized in the 1967 war.

As Israeli officials seemed to hint at a possible invasion by ground forces, eight members of one family, including five children, were killed in an early morning air strike that levelled two homes at Khan Younis in the south of the Gaza Strip near the Egyptian border, the Palestinian Health ministry said.

Israel's military made no comment on what would be the deadliest strike since its began its assault on Tuesday. The defence minister spoke of "long days of fighting ahead".

French President Francois Hollande voiced his concern at the civilian deaths in the Palestinian enclave and called for a truce. A spokeswoman for U.S. Secretary of State John Kerry, who like Hollande spoke to Palestinian President Mahmoud Abbas, said of possible escalation: "Nobody wants to see a ground invasion."

Israeli Prime Minister Benjamin Netanyahu said in a televised statement: "So far the battle is progressing as planned but we can expect further stages in future. Up to now, we have hit Hamas and the terror organisations hard and as the battle continues we will increase strikes at them."

Netanyahu discussed options with his security cabinet as air strikes continued and officials hinted at a possible ground offensive, there was no word on when or if this would happen.

"We have long days of fighting ahead of us," Defence Minister Moshe Yaalon said.

Across the Gaza Strip, smoke and rubble marked the aftermath of Israeli attacks.

"The Jews say they are fighting Hamas and fighting gunmen while all the bodies we have seen on television are those of women and children," said Khaled Ali, 45, a Gaza taxi driver.

Hamas spokesman Sami Abu Zuhri sounded a defiant note, when asked about defence minister Yaalon's remarks of further action to come. "Our backs are to the wall and we have nothing to lose," he said. "We are ready to battle until the end."

U.S.-backed Palestinian President Abbas, who is based in the West Bank and entered a power-sharing deal with Hamas in April after years of feuding, has denounced the Israeli offensive.