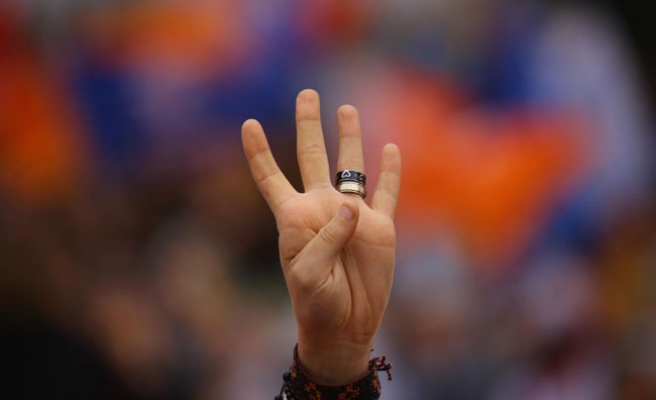 Anti-coup students staged on Sunday a series of protests against the detention of their colleagues and a court ruling bringing policemen back to university campuses.

Medical school students at Cairo University staged a protest to denounce the potential return of policemen to university campuses.

They also called for the release of university students detained by the army-backed interim authorities over the past months, according to eyewitnesses.

Protesting students chanted slogans against the Egyptian police and army, they added.

Students at the school of engineering staged a similar protest.

Millions of Egyptian school and university students went back to their classrooms on Saturday at the beginning of the second semester of the 2013/2014 academic year.

Anti-government protests had swept through Egyptian universities during the first semester, while the authorities arresting scores of students.

Last month, an Egyptian court ordered the return of policemen to university campuses to counter a rising tide of student protests.

On Sunday, students of the southern Cairo Helwan University organized a human chain to demand the release of colleagues detained over the past months.

They also called for bringing to account those responsible for the recent killing of many activists in recent months.

Another chain was organized in Zagazig, the capital of the Nile Delta province of Sharqiya.

The students raised banners warning against the return of policemen to university campuses.

They also called for the release of student prisoners.

Students staged similar rallies in the northeastern province of Ismailia, the central province of Beni Sueif, and in the Nile Delta city of Banha.

The students of a school in the southern province of Assiut – said to be affiliated to Muslim Brotherhood members but currently run by the Ministry of Education, refused to enter their classrooms.

"Islamic, Islamic," the students chanted before the school administration convinced them to set for their education.