Israel's Shimon Peres and Palestinian leader Mahmoud Abbas will pray for peace together following a surprise invitation made by Pope Francis during his visit to the Holy Land last month. 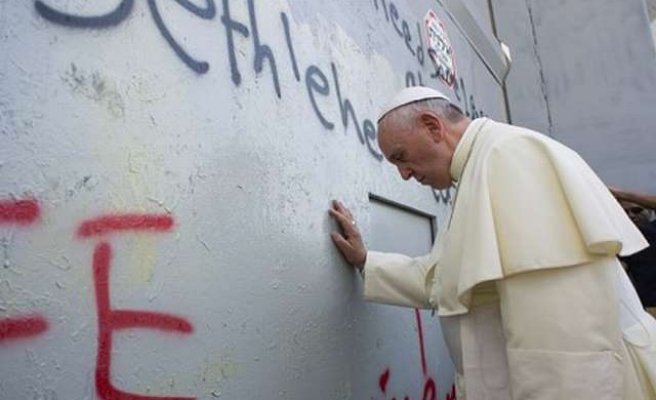 Pope Francis hopes an unprecedented meeting of the Israeli and Palestinian presidents at the Vatican on Sunday can help end "eternal negotiations" and lead to peace but he has no wish to meddle in Middle East politics, the Vatican said on Friday.

Israel's Shimon Peres and Palestinian leader Mahmoud Abbas will pray for peace together following a surprise invitation made by Francis during his visit to the Holy Land last month.

"This is a moment to invoke God for the gift of peace. This is a pause in politics," said Father Pierbattista Pizzaballa, a Church official in charge of Catholic sites in the Holy Land and a key organiser of Sunday's encounter.

"This is also an invitation to politicians to pause and look heavenward," Pizzaballa told a Vatican briefing. "Everyone wants something to happen, something to change. Everyone is tried of these eternal negotiations that never end ..."

The two presidents will spend about two hours in the Vatican gardens at an intricately planned service that will include prayers and meditations by Jews, Christians and Muslims in each other's presence.

The pope, Peres and Abbas will read individual invocations for peace, shake hands and plant an olive tree in the gardens. Patriarch Bartholomew, the spiritual head of the Orthodox Church, will also attend.

Francis' invitation is one of his boldest political gestures since his election March, 2013, but the Vatican has played down suggestions that the move is a bid by the pontiff to directly enter the Middle East peace process.

"The pope does not want to get into the political questions of the Israeli-Palestinian conflict that we all know about in the smallest of details from A to Z," Pizzaballa said.

The meeting is taking place more than a month after U.S.-led peace talks collapsed amid bitter mutual recrimination and Pizzaballa said the pope hoped the Sunday encounter could inject the leaders with a new will for peace.

"Pope Francis will never get involved in discussions about borders or settlements but his intention is to help create the social and religious atmosphere where it (peace) can come about," he said.

"No one thinks peace will break out on Monday. The intention of this initiative is to re-open a road that has been closed for some time, to re-create a desire, a possibility, to make people dream," he said.

Israeli Prime Minister Benjamin Netanyahu, the key Israeli decision-maker, will not be at the prayer meeting. President Peres, who is aged 90, is due to leave office in July, taking him out of the political picture.

The Vatican stressed that each president will be present not just as a Jew or as a Muslim but as a leader who counts Jews, Christians and Muslims among the citizens of his country.

"There will be no political speeches but each will pray for peace as individual believers," Pizzaballa said, adding that the structure of the prayer for each group would be identical to show that they are "children of the same God".

Greek Orthodox Patriarch Bartholomew has said he wants to contribute to Pope Francis’s prayer for peace in the Middle East.

Bartholomew told Italian newspaper La Repubblica: “I arrived in Rome to be a part of joint prayer.

Saying the prayer was an initiative to support peace in the war-torn region, he said in the article published on Saturday: "With God’s help, we should support diplomacy and politics to reach peace.

"The prayer should reach two conclusions. One is that the God should hear us. The other is that God should give hints to Europe and Asia that, with his assistance, we can reach tangible results."