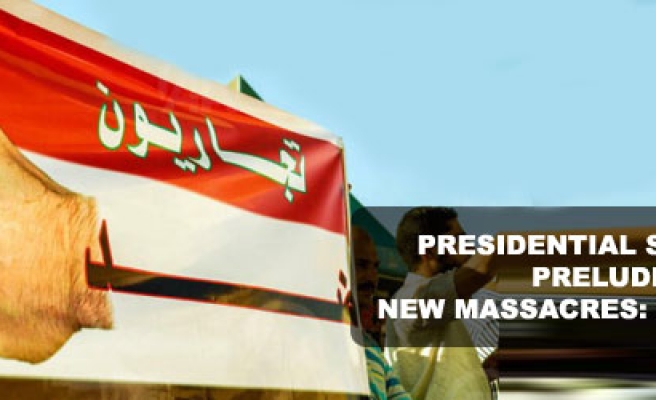 A senior Muslim Brotherhood leader has described a statement issued by the Presidency about the end and failure of diplomatic mediation efforts to resolve Egypt's political crisis as a "prelude to new massacres" against peaceful protesters demanding the reinstatement of ousted President Mohamed Morsi.

In a statement earlier today, the Egyptian Presidency said that diplomatic mediations to break the political deadlock triggered by Morsi's ouster have ended, blaming the Brotherhood for its failure.

The Egyptian capital has been abuzz with diplomatic activity in recent days, with officials coming from four continents for talks aimed at resolving the crisis triggered by the July 3 ouster of Morsi by the army.

Hishmat said proposals floated by mediators fell short of meeting the main demand of Morsi supporters on the return of legitimacy.

"We will continue our sit-in until this demand is met."

Ever since his ouster, Morsi's supporters have been staging daily mass rallies and sit-ins nationwide to demand his reinstatement, the return of the dissolved Shura Council (the upper house of Egypt's parliament) and the suspended constitution, along with prosecution of those responsible for the killing of protesters.

More than 140 pro-Morsi demonstrators were killed when security forces outside the Republican Guards compound and near Rabaa square attacked the demonstrators last month.

Ahmed Diab, a senior member of the Brotherhood's Freedom and Justice Party, said they do not recognize the interim president.

"The Presidency has no value as it is the product of a coup," he told AA.

He insisted that the presidential statement "shows that the coup leaders were in a quagmire due to the steadfastness of millions (of Morsi supporters) and that their sit-ins have exposed the lies of the coup leaders."