The six negotiators had been trying to set up talks between the Sunni town of al-Zara and the Alawite town of Qameira, which clashed for several days last week. 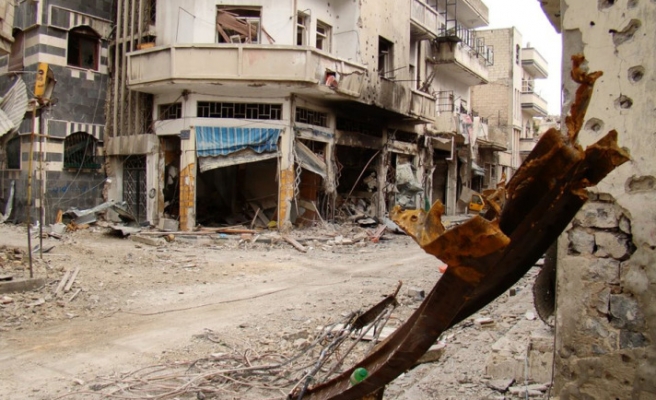 Gunmen loyal to President Bashar al-Assad shot dead at least six mediators sent to try to reconcile warring sectarian groups in the province of Homs, where people on opposing sides in Syria's war had until now been able to coexist, residents said on Tuesday.

The negotiators were from the National Reconciliation Committee, which the government set up to foster talks in a two-year conflict that has taken more than 100,000 lives.

The killings, which happened on Monday evening in the village of Hajar al-Abyad, highlight the growing challenge of mediating between towns held by rebel groups and those controlled by pro-Assad militias known as "shabbiha".

Recent fighting in the rural territory of western Homs province, part of a strategic corridor between the capital Damascus and Assad's strongholds on the Mediterranean coast, has frayed relationships between neighbouring communities and risks sparking a sectarian conflict in the area.

Western Homs province is a combustible mix of towns from Syria's long marginalised Sunni Muslim majority, which has supported the revolt against Assad, and towns that are home to minority sects that have largely supported the president.

Assad's forces, backed by Christian and Alawite militias, have been pushing a successful offensive in the area. Sunni rebels are now fighting back hard in order to maintain a foothold in the critical region.

The six negotiators had been trying to set up talks between the Sunni town of al-Zara and the Alawite town of Qameira, which clashed for several days last week.

"The Alawite militias ambushed the men, who are Sunnis, when they arrived in a nearby town to try to start talks. They began to suspect the team was secretly working with the rebels, because Qameira was hit with a surprise attack last week, and many soldiers were killed," one local resident told Reuters.

Most locals believed the team was killed with tacit approval from local government officials, the resident said, even though the men were from a state-sanctioned delegation.

Video uploaded by the pro-opposition Syrian Observatory for Human Rights showed a row of corpses inside black body bags, riddled with bullets and covered in flowers.

The western countryside was once a relatively calm region that served as a refuge for Syrians fleeing the fighting in larger cities and towns.

Locals say reconciliation between different communities is growing increasingly difficult even in remote rural areas where locals had long been able to negotiate truces between residents, Assad's forces, and the rebels.