Pro-Israeli lobby attempts to hit back at boycotts

Pro-Israeli US congressmen Peter Roskam and Dan Lipinski introduced the Protect Academic Freedom Act in February to block state funds from reaching groups that boycott Israel over its illegal settlements construction in the West Bank. 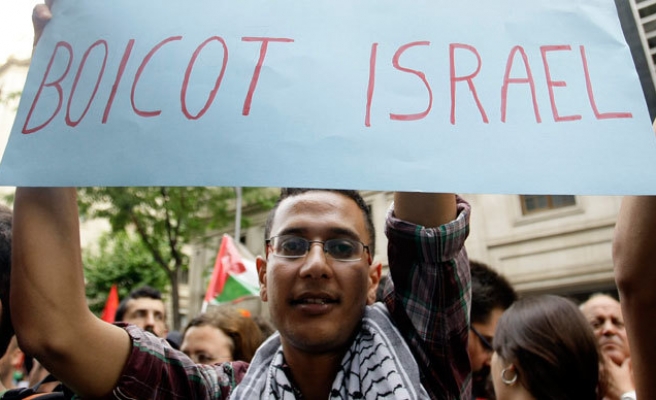 While the condemnation of illegal Israeli settlements in the West Bank have turned into a growing trend of boycotts against the Zionist state by companies based in both the US and Europe, pro-Israeli lobbyists are fighting back by pushing to cut firms who boycott Israel off from federal funding.

Led by the Boycott, Divestment, and Sanctions (BDS), which has been lobbying for the boycotts on behalf of the Palestinians, the movement is now seeing a backlash from two pro-Israeli US congressmen in particular. Republican Peter Roskam and Democrat Dan Lipinski introduced the Protect Academic Freedom Act in February to block state funds from reaching groups like the American Studies Association's (ASA).

However, this bill has been criticized for contradicting the First Amendment principles, which protects the advocation of boycotts to spur political, social and economic change by the Supreme Court. For this reason, pro-Israeli groups AIPAC and the Anti-Defamation League have not backed the bill. Rather, they are looking for more effective ways to counter the wave of boycotts.

The ASA's decision to boycott Israeli academics and educational institutions started what seems to be a domino effect, which was followed by the Modern Languages Association in New York. Dutch pension giant PGGM's decision to boycott Israeli banks was also followed by a similar decision made by Denmark's Danske Bank alongside Germany's Deutsche Bank, which blacklisted the Israeli Hapoalim bank as an "unethical company".

More European firms looke likely to join the trend after it was reported that Dutch pension fund ABP plans cut off ties to Israeli banks. Sweden's Nordea Investment Management and DNB Asset Management are also reconsidering their relationship with the Zionist state along with Norwegian pension fund KLP, according to the Financial Times.

Earlier in February, South African anti-apartheid icon and a close friend of the late Nelson Mandela, Ahmed Kathrada, was part of a South Africa's Parliamentary Portfolio Committee meeting which agreed to push international bodies such as the International Parliamentary Union, the International Criminal Court, the United Nations and the African Union to impose sanctions on Israel based on a 2009 Human Sciences Research Council (HSRC) report, which found Israel guilty of apartheid.

The boycotts look likely to threaten the livelihood of Jewish settlers in the West Bank and isolate Israel economically. Last year, boycotts on products like dates and grapes grown in the occupied Jordan Valley caused a $29 million loss for illegal Jewish settlers in the region. As reported in the Washington Post, income from exports dropped 14%, mainly due to big supermarket chains in Europe deciding to boycott the products.

The US Secretary of State, John Kerry, who is mediating in peace talks between Israel and the Palestinian Authority, recently warned Israel that its continuation of building illegal settlements in the West Bank threaten to veer the talks off-track, which could lead to more boycotts. His comments were met with anger from Israel Economic Minister Naftali Bennett and Strategic Affairs Minister Yuval Steinitz, who criticized Kerry's comments as "hurtful, unfair and intolerable."