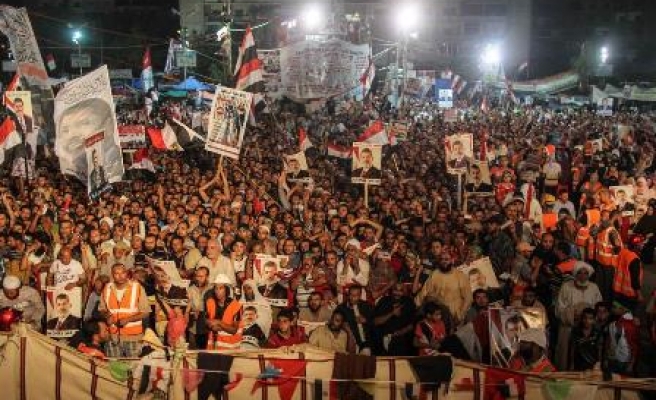 Backers of ousted President Mohamed Morsi will stage 33 rallies in Cairo and Giza on Friday to denounce the overthrow of the elected leader.

The rallies will start from mosques in the two governorates following the weekly prayers, the National Alliance for the Defense of Legitimacy, made up mostly of Islamist parties and groups supportive of Morsi, declared in a statement late Thursday.

The pro-Morsi coalition added that protesters will stage 21 marches in Cairo and 12 rallies in Giza.

"We call on protesters in Rab'a al-Adaweya and Nahda squares to listen to reason to serve the best interests of the homeland and leave their sit-ins quickly to ensure the safety of all parties," the ministry declared in a statement.

These people are believing they are matyring themselves, but for who? God? Certainly not, Morsi is not God, nor is he Mohammad, he is a man with failures and faults as all of us. These people have jihadist mentality and using children is one of their favorite sympathy ploys. Also, they are incredibly dirty and smelly, where do they go to toilet? Think about it. And many ARE armed with guns.

Another ploy of jihadists, using anyone as a shield. These groups are splitting so that the military would have to harm many innocents to get to them!