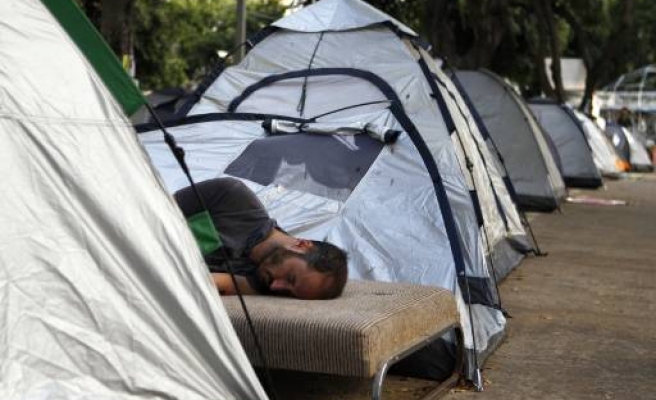 At times, Tel Aviv's thriving protest encampment resembles an earnest debating society, at other moments it seems more like one huge street party, or a meandering music festival, or simply a sun-soaked sit-in.

Born out of outrage over Israel's sky-high property prices, the protest movement has morphed in less than a month into a nationwide phenomenon that represents a mammoth mix of constituencies embracing many strands of Israeli society.

Some participants fear the ever-expanding list of grievances is diluting the original message of outrage at the daunting cost of living. But the haphazard enterprise shows no sign of deflating just yet, and the government is clearly anxious.

"For years our leaders ignored the country's social problems and the plight of the people. This should be a wake-up call and they can't brush it aside," said Irit Gabay, 58, a social worker taking part in a curb-side debate on the welfare state.

Last weekend more than 250,000 people hit the streets of Israel's commercial capital to demand reform. This weekend, protests are planned in smaller cities around the country to show the broad appeal of their rallying cry for social justice.

Prime Minister Benjamin Netanyahu, facing the biggest, and most unexpected challenge to his 2-1/2-year rule, has hastily established a committee to look into the demands of the mainly middle-class demonstrators. It has a month to report back.

For now, though, there is little evidence that the mostly young crowds that have taken possession of the boulevard look willing to let go. They are having too much fun.

"All that is good about Israel is on show here," said Sharon, a student from Jerusalem who declined to give her surname. "It is like Plato's republic. People who never talked to each other are suddenly connecting. It's beautiful."

Looking for love and solutions

The camp has taken on a life of its own.

Grubby silver tents snake along the walkway, interspersed by stalls promoting everything from animal welfare to rights for fathers. There is a soup kitchen, puppet shows for small children, a paddling pool, a dating agency for demonstrators seeking streetside romance, and numerous, impromptu music gigs.

"Please, no Beatles," one sign warns the roaming guitarists.

Amidst the organized chaos are small spaces of pavement set aside for sofas and chairs that mark out the debating arenas where Israel's many problems are discussed late into the night.

But other core demands, such as releasing more state land for public housing projects, might be easier to accommodate.

"We lack 120,000 houses in this country. People can't afford to buy a place to live and many are now finding it hard to rent. That is why the protests are so popular," said Simon Dhan, a youthful real estate broker wandering through the encampment.