Egypt's ousted President Mohamed Morsi's supporters will gather in four locations across Cairo to protest against the military coup after the Friday prayer on July 12. 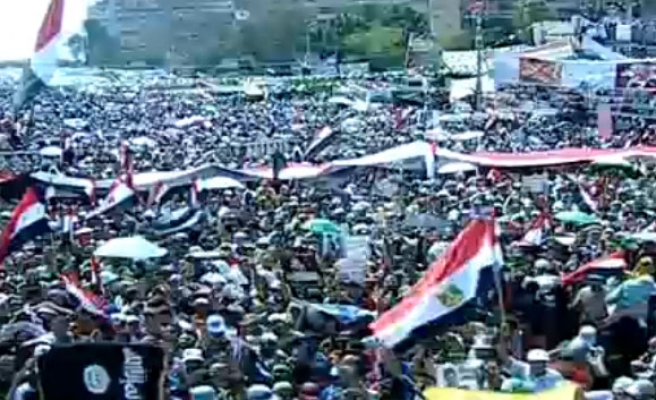 Egypt's ousted President Mohamed Morsi's supporters will gather in four locations across Cairo to protest against the military coup after the Friday prayer on July 12.

Mohammad Hassan, spokesperson for Jamaat al-Islamiyya movement, one of the biggest supporters of Morsi, told that people would take to the streets for reinstatement of Morsi.

"We are determined and we demand that Morsi be reinstated," said Hassan.

Protesters will gather at Rabiatul Adawiyah square and Nahda square and outside Egypt's Television and Radio Institute and the Presidential Palace to take part in mass protests.

People supporting Morsi are expected to come to Cairo from different cities to pour into the streets.

Meanwhile Egypt's rebel movement Tamarod which collected signatures for a petition and took people to the streets to protest against Morsi to demand his resignation called on to organize an iftar for national unity in Tahrir Square and in front of the Presidential Palace on the first Friday of Ramadan.

Mass protests in Egypt began on June 30 calling for resignation of President Mohamed Morsi. Following the protests, unrest was ignited in the country.The unrest and rising death toll prompted the military to warn Morsi on July 1 that it would intervene and impose its own "roadmap" if he did not satisfy the public's demands within 48 hours and end the political crisis.

Democratically elected Morsi was toppled by the Egyptian armed forces on July 3, and the army announced the suspension of the constitution.