Protests against Egyptian massacres across Turkey

Members of the Anatolian Youth Association (AGD), an association for unity and fraternity among Turkish youth in Turkey, rallied throughout Turkey to support pro-Morsi supporters and condemn the military's harsh reaction against them 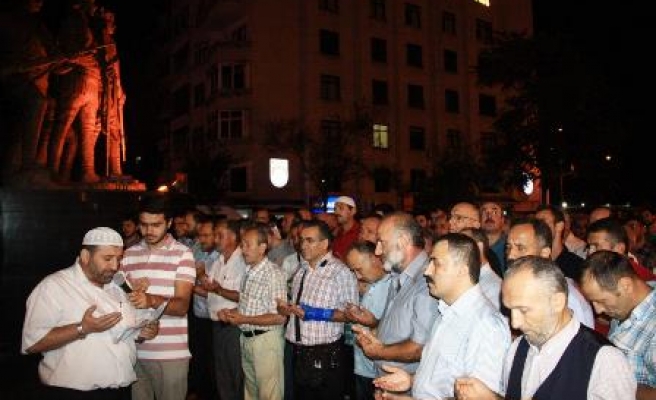 Members of Anatolian Youth Association (AGD), an association for unity and fraternity among Turkish youth in Turkey, rallied in front of Ayasofya Museum in order to protest the Egyptian army's takeover of government and support pro-Morsi supporters at Rab'a al-Adaweya Square. About 2,000 people rallied and shouted slogans against Egyptian army's coup.

Another group of the association (AGD) in western Afyonkarahisar province rallied in the garden of Imaret Mosque and unfurled banners, shouting slogans to express their reactions against the massacres in Egypt. Chairman of AGD Afyonkarahisar branch Mevlut Uyumez stated that they commenced a nationwide movement across Turkey to support the pro-Morsi supporters, adding "Over 200 people were killed and about 5,000 injured during the events. Ignoring this massacre is a crime against humanity."

Anatolian Youth Association (AGD) held a program in Kutahya, a province in the Aegean region of Turkey, in which many non-governmental organizations participated. The program started with iftar (fast-breaking meal) in open-air. Chairman of AGD Kutahya branch Erol Taskin made a speech and said they stood strongly against pro-coup supporters who committed massacres in Egypt. He also said, "Those who were holding peaceful demonstrations were massacred at Rab'a al-Adaweya. We are here to protest [the murders]. General Sisi is the head of this terrorism. Morsi is the only state president of Egypt."