The Russian leader will discuss the situation in Iraq, Syria and Libya as well as the Israeli-Palestinian conflict. Putin presented the gift - which kills an estimated 250,000 people every year - to Egyptian counterpart 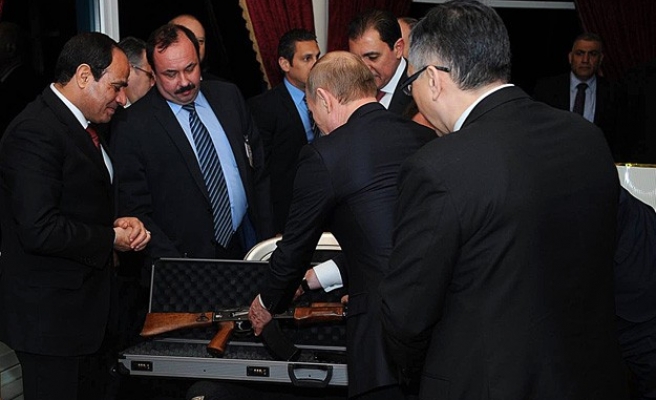 The Egyptian president Addel-Fattah el-Sisi enjoyed a heart-warming moment after his Russian counterpart presented him with a Kalashnikov during an official visit.

The gift of an AK-47, also known as a Kalashnikov rifle, foreshadows a possible billion-dollar Russian deal to supplied Egypt with weapons.

There are between 75 and 100 million Kalashnikovs, created by Russian Mikhail Kalashnikov, in existence – or one for every 60 people on the planet. An estimated 250,000 people die every year from wounds inflicted by an AK-47.

State owned Al-Ahram newspaper ran a full-page encomium on the Russian president at the weekend – “Putin,  hero of this era”, ran the grovelling headline.  The Sisi government swamped central Cairo streets with posters of their Russian guest, each carrying “Welcome” in Arabic, Russian and English.

The Russian leader hailed "dynamic" bilateral relations, saying that trade increased by almost 50% in 2014 compared with the year before.

Putin also suggested the two countries would discuss ending the use of the US dollar in bilateral trade, switching to national currencies instead.

Egypt, the world's top wheat importer and the second- largest buyer of Russian wheat, has been hit by Russia's decision to curb grain exports as Moscow seeks to cool domestic prices amid an economic crisis.

The Kremlin said in a statement that Putin and Egyptian President Abdel-Fattah al-Sissi would discuss the situation in Iraq, Syria and Libya as well as the Israeli-Palestinian conflict.

Putin is a key non-Arab backer of President Abdel Fattah al-Sisi, who faces harsh criticism from Washington for his deadly crackdown on dissent since elected leader Mohamed Morsi was ousted by the then army chief in July 2013.

Hundreds of Morsi's supporters have been killed and thousands imprisoned in a crackdown since his ouster.

Experts say Putin's visit is also aimed at showing that he is not isolated internationally despite the crisis in Ukraine.

Russia was also one of the first countries to endorse Sisi's presidential bid last year.

Sisi himself visited Russia soon after ousting Morsi as a defence minister amid deteriorating relations with Washington, and followed it up with another trip in August 2014 as president.

At their meeting last summer at Putin's summer residence in Sochi, the two discussed Russia supplying weapons to Egypt, which is fighting an insurgency on the Sinai Peninsula that has killed scores of policemen and soldiers.

Moscow has aimed to grab a larger slice of the Egyptian arms market after Washington suspended some weapons deliveries in the immediate aftermath of Sisi's crackdown on Morsi supporters.

The sanctions imposed on Russia by the European Union and the United States represent a good opportunity to open the markets between Russia and Egypt. Putin said Russia will provide Egypt with at least 5 million tons of wheat in the current year and will increase its imports of Egyptian agricultural commodities earlier.