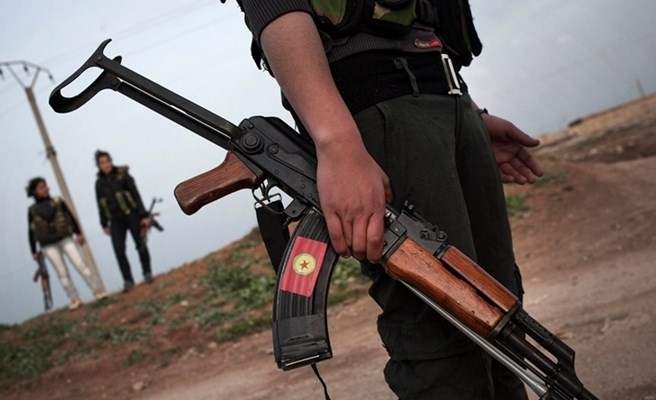 Forces of the Kurdish Democratic Union Party (PYD) have committed significant human rights violations in north and northeastern Syria -- including "ethnic cleansing massacres" -- since the withdrawal of government forces in 2012, according to a report published Monday by the London-based Syrian Network for Human Rights (SNHR).

The PYD is the Syrian affiliate of the PKK, which is listed as a terrorist organization by Turkey, the EU and the U.S.

Since taking over remote regions of northern and northeastern Syria, the report said, the PYD and the affiliated Kurdish Self-Management (KSM) forces had committed major human rights violations, including extrajudicial killings, enforced displacement, arbitrary arrests and enforced disappearances, along with other violations against women, children and media personnel.

According to the report, the PYD has sought to ethnically cleanse towns under its control that were inhabited mostly by Arabs.

Three massacres that took place in the Al-Hasakah governorate, for example, resulted in the death of 91 civilians, including 17 children and seven women, the report asserted.

The first massacre was committed on Nov. 21, 2013 in the town of Al-Aghbiesh, where six people -- including one child -- were killed.

The second, committed three months later in the town of Tal Brak, resulted in 43 civilian deaths, including one child and four women.

KSM forces had arbitrarily arrested no fewer than 1,651 people, including 111 children, since the beginning of the uprising in Syria in early 2011, said the SNHR.

"Further, we recorded the death of not less than 16 individuals under torture at the hands of KSM forces since it [the KSM] was established and until the end of December 2015," the network added.

Among them was 16-year-old Affan Jomaa al-Aboush, whose tortured body was found near a KSM military checkpoint on Dec. 17, 2014, only five days after he was arrested from his home by KSM forces.

According to the report, 42 women -- including 33 adults and nine adolescents -- have died at the hands of PYD forces since March 2011, mostly as a result of "random shelling or through direct firing during raiding campaigns or sniping".

The SNHR also documented the arrest of 88 women, including 34 girls under the age of 18, between January 2014 and October 2015. The arrests, the network said, had been aimed at forcibly recruiting women.

At least 51 children were reportedly killed by KSM forces from January 2014 until the end of 2015, while 111 others were subject to arbitrary arrest between January 2014 and November 2015, the report said.

The SNHR also documented the forced recruitment of no less than 1,876 children in different parts of Aleppo and the Al-Hasakah suburbs.

"Children were forced to participate in battles, fights and searching checkpoints. Children have been forced to use… guns since 2012," the report asserted.

The report also documented 24 cases of the arrest or abduction of media activists, all of whom were subsequently released.

Rights breaches committed by KSM forces had also led to the displacement of tens of thousands of Al-Hasakah residents, mostly Arabs, while dozens of other towns are now void of inhabitants, according to the report.

"We also recorded robbery cases and the almost complete destruction and incineration of entire towns. Crops were also confiscated or burned; properties and lands were flattened. All these actions forcibly displaced tens of thousands of residents," the report stated.

"In an internationally unarmed conflict, and according to Article VIII of the Rome Statute, all these violations amount to war crimes and crimes against humanity and constitute breaches to the Customary International Humanitarian Law," it added.

It went on to assert: "These incidents entail a pattern of killing, burning and arrests based on ethnic backgrounds."

While most violations were reportedly committed against Arabs, other ethnic groups in Al-Hassaka have also been targeted, according to the SNHR.

"For instance, in February 2015, nearly 100 Turkmen families were subjected to cruelty, injustice and oppression," the report stated.

"Some of these residents also told us that they were forced to… leave the city due to arbitrary arrests and armed clashes," it added.

According to the report, the PYD constitutes the main core of the movement that has since been dubbed the Kurdish Self-Management Forces, which was established by the Kurdish YPG (the PYD’s armed wing) in January of 2014.