The PYD flag which had been hoisted on a building in the Syrian town of Ras Al-Ayn has been replaced by the flag of the Syrian Local Coordination Committees (LCCS). 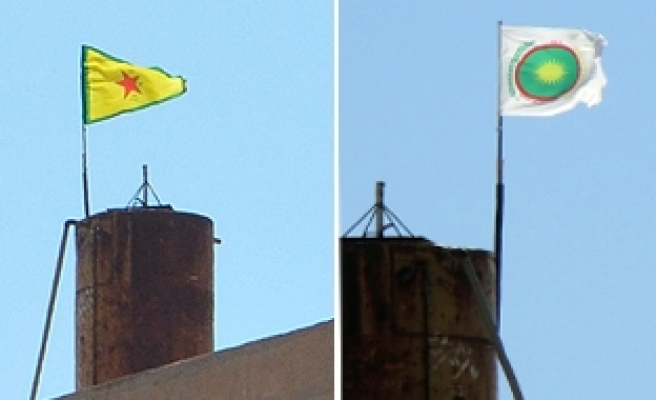 The Democratic Union Party (PYD) flag which had been hoisted on a building in the Syrian town of Ras Al-Ayn, which neighbors the Ceylanpınar dsitrict of Turkey’s Sanliurfa and is currently under the control of PKK-affiliated PYD, has been replaced by the flag of the Syrian Local Coordination Committees (LCCS).

Armed fighting has been escalated between the Kurdish PYD and other groups over control of towns in northern Syria.

Clashes between Al-Nusra Front and PYD continued over night and the gunshots were heard from Turkish border town of Ceylanpinar at intervals.

The PYD had previously hoisted their own flag on the building after gaining control of the town.

Security measures taken by Turkish security officials in the border remain in tact.

Turkish Foreign Minister Ahmet Davutoglu had previously said Turkey had to take certain measures to protect its border security, reminding that the death of a Turkish citizen in Ceylanpinar raised the public's sensitivity about the border security.

Davutoglu also said, "Recognition of de facto situations would lead to further bloodshed, and turn the bilateral clash into multilateral one in Syria,"  referring to the claims about Ras Al Ayn's seizure by the PYD in line with its alleged plans to declare autonomy in north of Syria.

To make it right, the new raised flag is for the Kurdish Supreme Council which is an umbrella for almost all Kurdish parties and groups in Syria!