PYD replaces FSA flag with own in Ras al-Ain 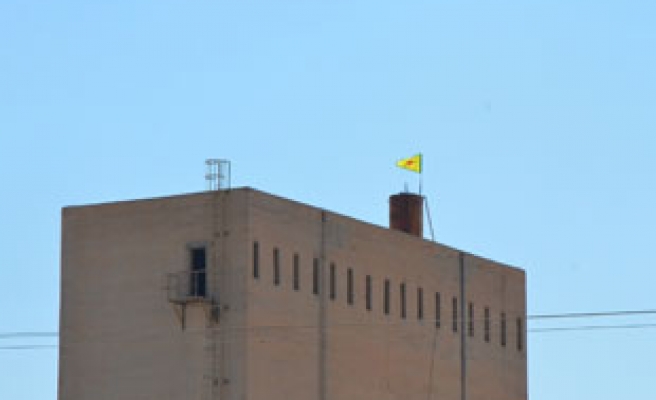 A Syrian Kurdish party with links to the Kurdistan Workers' Party (PKK) has replaced the flag of the opposition Free Syrian Army (FSA) with their own after seizing control of a Syrian town on the Turkish border following days of clashes with fighters affiliated with the al-Nusra Front.

The capture of Ras al-Ain by the Democratic Union Party (PYD) fueled Ankara's fears that the emergence of an autonomous Kurdish region in Syria could embolden homegrown members of the PKK, which is fighting for autonomy in Turkey.

On Friday, Turkish warplanes took off from Diyarbakır and flew low over the Turkish-Syrian border, where clashes continue. Authorities say they didn't violate Syrian airspace and only inspected the area for the safety of Turks.

The military said it had strengthened security along that part of the border with armored vehicles.

After fully capturing the town, PYD militants replaced the flag of FSA, raised on the top of an abandoned factory that is some 100 meters away from the Turkish border, with its own yellow flag. The flag can clearly be seen from the Turkish side.

Turkish troops shot at PYD fighters in Syria in line with their rules of engagement after two rocket-propelled grenades fired from Syria struck a border post on the Turkish side.

The return fire was the second time in as many days that the military had answered in kind. Stray bullets from Syria struck the police headquarters and several homes in the adjacent Turkish town of Ceylanpınar on Tuesday.

The clashes between Kurdish militants, who want an autonomous region within Syria, and Arab fighters from the al-Qaeda-linked al-Nusra Front started on Tuesday after Nusra fighters attacked a Kurdish patrol.