Qaeda in Syria threatened to fire on protesters 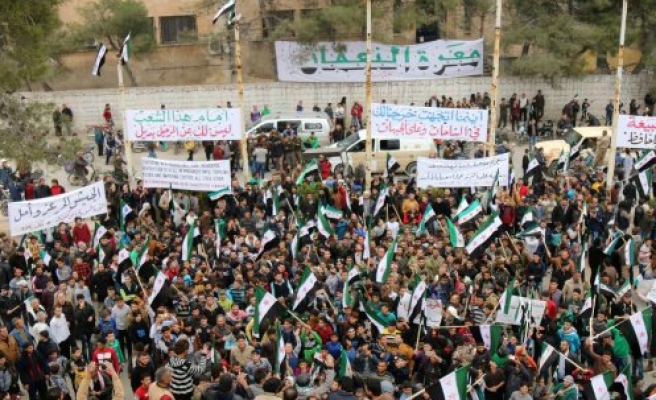 An anti-government protest in the northwestern Syrian city of Idlib ended abruptly Monday when members of Al-Qaeda's affiliate in the war-torn country threatened to shoot at demonstrators, an activist said.

Protestors gathered in Idlib city in the afternoon, using the relative lull in fighting to resume demonstrations against President Bashar al-Assad, according to activist Ibrahim al-Idlibi, who is from the city.

"We invited people to come protest in the city at 3:00 pm (1300 GMT), thinking we could resume the popular protest movement inside the city," he said.

But when demonstrators began marching from the gathering point to Idlib's main square, members of Al-Qaeda's affiliate in Syria, Al-Nusra Front, tried to stop them.

"The Al-Nusra fighters came out and began to fight the protesters, to threaten them with their guns saying, 'If you don't leave the streets, we'll start to fire,'" Idlibi said.

Al-Nusra proceeded to seize about 10 people and wave Al-Qaeda's black flag, according to Idlibi.

Syria's war erupted five years ago when security forces turned their weapons on protesters demanding Assad's ouster, sparking the all-out conflict that has killed more than 270,000 people and displaced millions.

The city of Idlib was captured in March 2015 by a coalition of groups led by Al-Nusra and its Islamist ally, Ahrar al-Sham.

Idlibi said the atmosphere in the city remained "tense," but that activists were already organising a new protest "against anyone that oppresses the Syrian people, from Nusra on down."

The confrontation sparked a backlash on social media, with many activists condemning Al-Nusra's actions against the protesters.

In January, Al-Nusra briefly abducted two of Syria's most prominent media activists from the radio station they worked at in Idlib province.

Raed Fares and Hadi al-Abdallah were held by Al-Nusra for about 12 hours after storming the headquarters of Fresh FM in Kafranbel.