Dozens of supporters of ousted president Mohamed Morsi celebrated on Friday the 62nd birthday of the deposed leader, 11 days before his actual birthday on August 20. 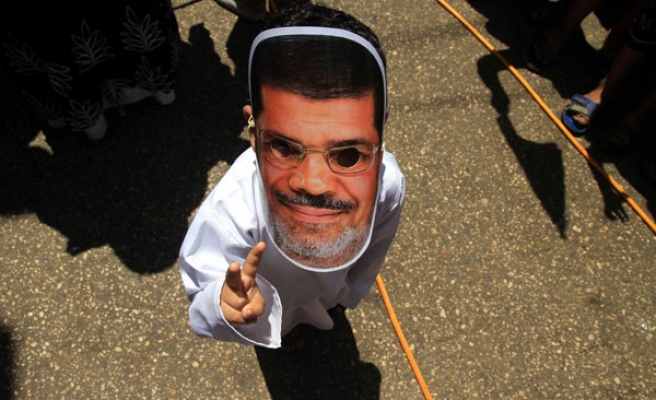 Dozens of supporters of ousted president Mohamed Morsi, camping out in Cairo's Rabaa al-Adawiya square, celebrated on Friday the 62nd birthday of the deposed leader, 11 days before his actual birthday on August 20.

"We wanted to deliver a message through our celebration of President Morsi's birthday. We wanted to tell him that 'despite your absence, we would not abandon you'," Salwa, one of the celebrators, told Anadolu Agency.

Morsi, Egypt's first democratically elected president, was overthrown by the powerful military on July 3 following mass demonstrations against his rule.

He has been kept at an undisclosed location since his ouster as authorities say he is being held over charges of "conspiring" with the Gaza-based Hamas movement to carry out "hostile acts" inside Egypt.

Pro-Morsi demonstrators have been staging daily mass rallies and sit-ins nationwide calling for his release and reinstatement and denouncing what they described as a "military coup" against the elected leader.

According to AA reporter, the celebrating protesters made a cake carrying the image of the ousted president. They lit candles as they sang 'happy birthday' songs and chanted against the "military rule".

The protester said that they wanted to throw an early birthday party so that it can coincide with the Eid al-Fitr celebrations.

"Our party is also a message to Defense Minister Abdel-Fattah al-Sisi to know about our determination to see the president reinstated, and we will continue our protests until our demands are met," Salwa said.

Another celebrator gave another message of support.

"We love Morsi and we would not leave the square until he returns to power," Farah Mohamed, an independent activist, said.

"All should know that various spectra of the Egyptian people want to see Morsi's return to power," she added.

Mohamed Sharaf, a member of the pro-Morsi Conscience Coalition, said: "the symbolic birthday highlights that legitimacy and calls for Morsi's return to power are not the cause of a specific trend alone, but the cause of the whole people."