The coalition expressed that there needs to be the "halting attacks against peaceful protesters, stopping campaigns that incite bloodshed, releasing all detainees and halting accusations" for dialogue. 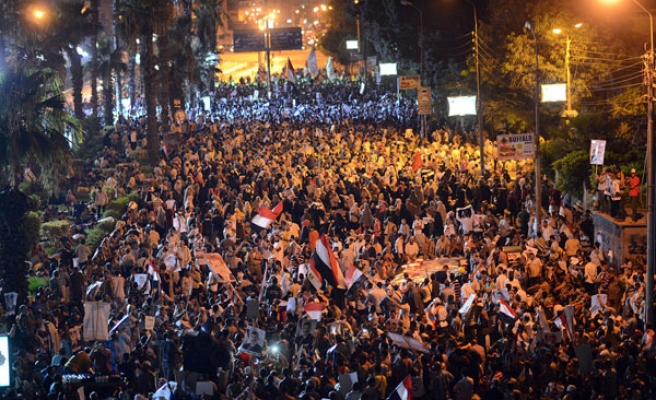 A coalition of largely Islamist parties and groups supportive of ousted president Mohamed Morsi has called on Egypt's rulers to send "reassuring messages" to pave the way for discussing initiatives aimed at solving Egypt's political crisis.

"Creating a favorable atmosphere needs initiatives from those in power," Mohamed Mahsoub, a delegation member of the National Alliance for the Defense of Legitimacy, said following a meeting with EU foreign policy chief Catherine Ashton on Monday.

"We need reassuring messages that can prepare the atmosphere for discussing all initiatives (to solve the crisis)," he added.

"We can not engage in dialogue for a solution while leaders of one party are absent," he added.

"Those leaders and figures must be released in order to be able to discuss possible solutions."

The Alliance has called for mass protests on Tuesday against what they call the 'military coup' against elected president Mohamed Morsi.

The National Alliance for the Defense of Legitimacy has called for mass rallies on Tuesday against the killing of pro-Morsi supporters.

"The National Alliance for the Defense of Legitimacy calls on the Egyptian people to take to the streets and squares nationwide to continue their peaceful revolution against the brutal coup and aggression and terrorism being practiced by coup leaders," it said in a statement, a copy of which was obtained by Anadolu Agency.

The Health Ministry said that 80 people have so far been confirmed dead in attacks between pro-Morsi demonstrators and security forces near the Rabaa al-Adawiya Square on Saturday.

Ever since his ouster by the military on July 3, Morsi supporters have been staging daily mass demonstrations and sit-ins nationwide demanding his reinstatement.

The two biggest sit-ins have been staged in Rabaa al-Adawiya Square in eastern Cairo and Nahda Square in Giza.

Ever since his ouster, thousands of his supporters have been staging daily demonstrations and sit-ins to defend his democratic legitimacy and demand his reinstatement.