In the capital Damascus, troops overran a suburb on Wednesday and killed at least 35 people, mostly unarmed civilians, residents and activist organisations said. 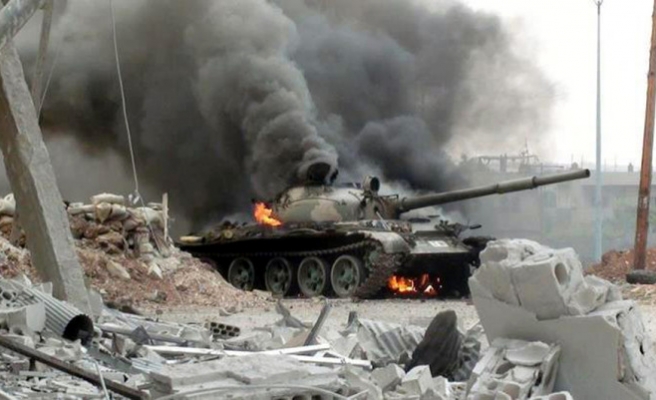 Syrian rebels turned a captured tank against government forces onThursday and bombarded a military airbase, a welcome boost to their firepower in the week-long battle for the country's commercial capital Aleppo.

President Bashar al-Assad's troops meanwhile pounded the strategic Salaheddine district in Aleppoitself with tank and artillery fire while rebels tried to consolidate their hold on areas they have seized.

In the capital Damascus, troops overran a suburb on Wednesday and killed at least 35 people, mostly unarmed civilians, residents and activist organisations said.

The fighting for Syria's two biggest cities highlights the country's rapid slide into full-scale civil war 17 months on from the peaceful street protests that marked the start of the anti-Assad uprising.

World powers have watched with mounting concern as diplomtic efforts to find a negotiated solution have faltered and violence that has already claimed an estimated 18,000 lives worsens.

The rebels' moral was boosted when they turned a government tank's gun on the Menakh airbase 35 km (25 miles) north of Aleppo, a possible staging post for reinforcements for the army's attack onAleppo.

"We hit the airport using a tank that we captured from the Assad army. We attacked the airport a few times but we have decided to retreat at this time," a rebel fighter named Abu Ali told Reuters.

The pro-opposition Syrian Observatory for Human Rights said government forces at the airbase had used artillery and rocket launchers to bombard the town of Tel Rifaat, which lies between the airbaseand Aleppo.

Reuters correspondents heard heavy weapons fire on Thursday morning from Salaheddine in southwest Aleppo, a gateway to the city of 2.5 million people that has been fought over for the past week.

Heavily armed government troops are trying to drive a force of a few thousand rebel fighters from the city in battle whose outcome could be a turning point in the conflict.

Although government forces have made concerted efforts to take Salaheddine, a full-out assault on the city as a whole has yet to take place.

Mobile phone connections have been cut since Wednesday evening, leading to speculation among residents that an increase in military action might be imminent.

Facing tanks and artillery in Salaheddine, a shattered neighbourhood that straddles a highway into the south, rebels said they planned an offensive elsewhere in the region but did not disclose their objective.

The rebels are consolidating areas they control in Aleppo, attacking police posts and minor military installations with some success. They claim to have seized three police stations this week.

In Damascus, still a government stronghold but a scene of combat in the past two weeks, government troops faced new accusations of atrocities after they overran a suburb on Wednesday.

"When the streets were clear we found the bodies of at least 35 men," a resident, who gave his name as Fares, said by phone from Jdeidet Artouz, southwest of Damascus.

"Almost all of them were executed with bullets to their face, head and neck in homes, gardens and basements."

Syrian state television said "dozens of terrorists and mercenaries surrendered or were killed" when thearmy raided Jdeidet Artouz and its surrounding farmlands.

In a rallying cry to his troops on Wednesday, Assad said their battle against rebels would decide Syria's fate.

But his call-to-arms, in a written statement, gave no clues to his whereabouts two weeks after a bomb attack on his inner circle.

Assad, who succeeded his late father Hafez 11 years ago to perpetuate the family's rule of Syria, has not spoken in public since the bombing in Damascus killed four of his close security aides, although he has appeared in recorded clips on television.

His low public profile suggests acute concern about his safety since the attack in which his brother-in-law died.

Amid growing signs that the humanitarian crisis in Aleppo is getting worse, the World Food Programme said it was sending emergency food supplies for up 28,000 people.

The fighting in Salaheddine district, part of a rebel-held arc stretching to the northeast of Aleppo, has left neither side in full control.

On Al-Sharqeya Street, residents and shop owners looked in awe at the damage. Some searched through what was left of their buildings - huge piles of concrete and twisted metal.

"I saw death before my eyes," said Abu Ahmed as he abandoned his home. "I was hiding in the alleyway of my building when I heard the whiz of the artillery. Look at my street now."

They said the damage was caused by helicopter fire targeting a rebel brigade based in a school. It missed the school and hit the residential buildings instead.

"This dog Assad and his men are so blind they can't even target a brigade properly," said Abu Ahmed, waving a plastic bag with his meagre belongings inside.

State television said on Wednesday the army was pursuing remaining "terrorists" in one Aleppo district and had killed several, including foreign Arab fighters.

Some foreign fighters, including militant Islamists, have joined the battle against Assad, who accuses outside powers of financing and arming the insurgents.

Aleppo, a commercial hub with a historic Old City, had long stayed aloof from the uprising, but many of its 2.5 million residents are now caught up in battle zones, facing shortages of food, fuel, water and cooking gas. Thousands have fled and hospitals and makeshift clinics can barely cope with casualties after more than a week of combat.

"The humanitarian situation is deteriorating in Aleppo and food needs are growing rapidly," the World Food Programme said.

In a shift toward increased foreign involvement in the war, U.S. President Barack Obama signed a secret order authorizing American support for the rebels, according to U.S. sources familiar with the matter.

The order, approved earlier this year, broadly permits the CIA and other U.S. agencies to provide support that could help the rebels oust Assad.

The lightly armed insurgents are battling a well-equipped army that has overwhelming superiority onpaper. But the rebels have managed to capture some tanks and heavy weapons and their ranks are swelled by army defectors.