Recommendations of Syria report on post-Assad

Syrian opposition members launched "The Day After" project in January, helped by the U.S. Institute of Peace and the German Institute for International and Security Affairs. 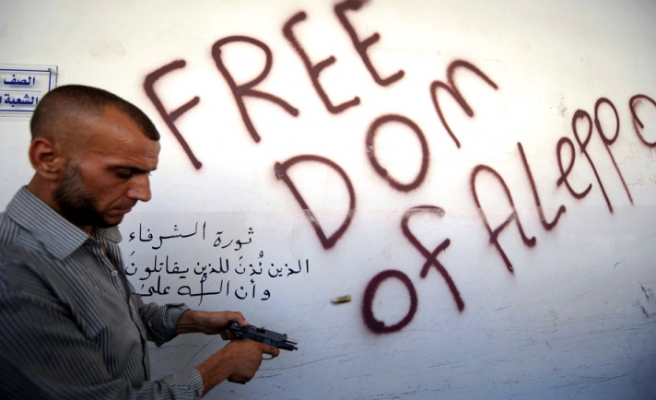 While war rages in Syria and the international community tries to unify the country's disparate opposition forces, a small group of Syrians has completed plans for the day after President Bashar al-Assad falls.

Their report, due out next week, is among the first substantive efforts by Syrians themselves to map out a transition for post-Assad Syria and avoid what many fear will be continued bloodshed even if he leaves power.

Worried about precisely that development, Syrian opposition members launched "The Day After" project in January, helped by the U.S. Institute of Peace and the German Institute for International and Security Affairs.

"What worried the group a lot was the possibility that the collapse of the Assad regime could be followed by a spike in sectarian violence," said Steven Heydemann, a Syria expert at the government-funded USIP. "That there would be a lot of residual anger and a lot of perhaps residual violence that might undermine prospects for a transition to democracy."

The United States and its allies are hoping for a new government that can bridge sectarian divisions and unite a country that includes majority Sunni Muslims and minority Alawites like Assad, along with Christians, Kurds and Druze.

Members of those groups participated in the project, and the 120-page report titled "The Day After; Supporting a Democratic Transition in Syria" is scheduled for release on Tuesday in Berlin.

"It is most definitely not a blueprint. It's a series of recommendations based on experts from around the world who have worked on transitional frameworks and it's based on our experiences and knowledge as Syrians," said Rafif Jouejati, a Syrian-American activist who is on the project's executive committee.

About 50 Syrians, some participating from inside the country via Skype, worked on the project which sought to develop recommendations based on the principles of tolerance, transparency, and accountability, Heydemann said.

Syrian leaders are waiting in the wings ready to step forward once Assad falls, Jouejati said. "I believe there are different leaders who have been identified, but they are not being announced for fear that they will lose their lives."

"But our role was not to pinpoint any leader or leaders. Our role is not to define the transitional government. It was simply to provide recommendations for how we thought Syria should transform into a democratic civil state," she said.

Jouejati said the report's recommendations include:

- A transitional period to restore stability and begin national healing, return people to their homes and cities, and ensure cross-sectarian dialogue, followed by elections.

- The armed forces should serve in the role of protecting borders and not in an intelligence function to spy on citizens.

- The transitional government should concurrently offer relief, repatriate refugees living abroad, construct housing to replace homes destroyed in battle, and resettle those who are internally displaced.

- Syrians should undertake a weapons clean-up program with the different armed factions so there is a clear delineation between armed forces and civilians.

While the purpose of the report is not to demonstrate to a skeptical international community that there is cohesion among the Syrian opposition, or that new leaders are waiting in the wings, it could serve those ends, Jouejati said.

U.S. officials say planning for the post-Assad period in Syria has been stepped up, particularly with key NATO ally Turkey, which is regarded as a pivotal player.

Secretary of State Hillary Clinton met Turkish officials in Istanbul two weeks ago to coordinate efforts on Syria and set up a joint working group.

U.S. officials say the new working group is aimed at developing a "whole of government" approach to the next stages of the Syria crisis, in conjunction with Turkish military and intelligence services, which are believed to have some of the best insight into events unfolding across the border.

"Syria's future is really up to the Syrian people and they'll have to decide how to work out a new system of government if Assad goes," said a U.S. official, speaking on condition of anonymity.

"Without responsible leadership on all sides the country, post-Assad, could slide deeper into civil strife, but there's nothing inevitable about this outcome."

U.S. Defense Secretary Leon Panetta has said that Syria's armed forces should stay intact if Assad leaves power. That is in contrast to Iraq, where the United States disbanded the army, a step that inadvertently stoked the insurgency there.

Concern that the humanitarian crisis will destabilize the broader region is also weighing on the international community. The United Nations has said about 170,000 people have fled Syria as a result of the fighting.

Equally worrisome is the threat of a drawn-out Syrian civil war.

"We have this physical imagery of civil wars spilling across boundaries, it sort of appeals to our sense of how nasty things spill, like coffee on the kitchen table," said Paul Pillar, a former CIA analyst who is now a Georgetown University professor.

"I frankly don't worry about that nearly as much as just a prolonged conflict inside Syria," Pillar said.