Refugees refuse to return to Syria, unsafe in Lebanon

Muhammed Kizle, a refugee from Homs who is also sleeping at the school, says he fears being kidnapped by spies working for the Syrian government in Lebanon and being taken back to Syria by force. 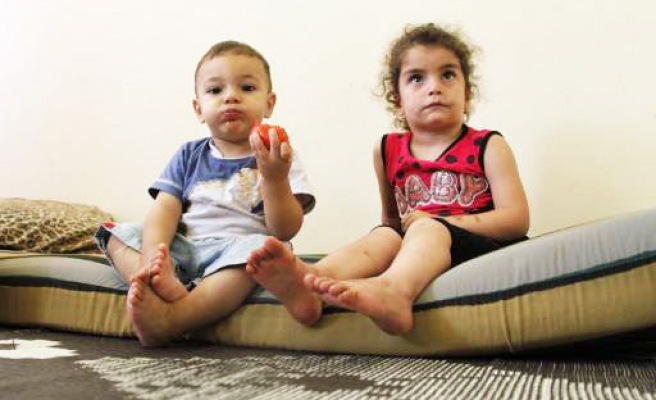 Syrian refugees who have fled violence and bloodshed into neighbouring Lebanon say they are unable to return for fear of persecution, but complain that they are still not safe from Syrian authorities who, they say, have infiltrated Lebanon.

"I can't return until the regime falls," said dissident Suheed al-Aqari, 30, who has been staying at an abandoned school where food and shelter are provided by a local charity.

"Two of my cousins returned to Syria, but after five or six days they were captured. We think they are in a prison in Damascus," Aqari said, adding that his wife and children are still in Syria.

Aqari says his political beliefs made him a fugitive from authorities and the feared Shabiha, heavily armed gangs who fight alongside the Syrian army and scout out dissidents.

More than 3,800 displaced Syrian refugees have registered with the United Nations refugee agency (UNHCR) in north Lebanon, which borders Syria's Homs province, a particularly bloody centre of the uprising against President Bashar al-Assad.

Muhammed Kizle, a refugee from Homs who is also sleeping at the school, says he fears being kidnapped by spies working for the Syrian government in Lebanon and being taken back to Syria by force.

"I know there are people who work for the regime (here). We have to prevent ourselves from being captured. If we want to go to the shop, we go in groups and return straight away," he added.

The United Nations says 2,700 people have been killed and thousands more imprisoned since Syrians rose up against Assad six months ago.

Syrian authorities blame the violence on armed groups and "terrorists", saying 700 soldiers and police have been killed, but refugees told Reuters they only encountered government brutality.

After reports of killings in Homs spread this month there was a sharp hike in the number of refugees and the flow could become a spiralling refugee crisis if numbers continue to increase at present rates.

"The numbers are increasing. In September we've had more than 1,000 enter Lebanon after reports that we received on growing violence in Syria," Alain Ghafari, a field coordinator for UNHCR told Reuters at the field office.

"Most of the Syrians that we are meeting in Lebanon say they will not go back ... and are fleeing violence," he added.

Refugees say their numbers are closer to 6,000 and that not all have registered with UNHCR. Many are living with Lebanese families with whom they often have family and friendship ties.

UNHCR says town mayors have asked local families to host the Syrians and some are being sheltered in half-built houses.

At building sites across Wadi Khaled, the mountainous region in northern Lebanon where the refugees stay, Syrians can be seen sitting on dusty carpets to eat family meals in unfinished homes still without walls.

Wadi Khaled is known as a base for smuggling as petrol and certain food items are cheaper in Syria. Residents have told Reuters that unofficial movement across the border was fluid before the crisis.

But since Syrians started fleeing, residents say, the number of Syrian border guards has grown and they are shooting refugees who cross illegally. Syrian soldiers can be seen patrolling the border, which is demarcated only by a small river.

Mustafa Halim, a 41-year-old refugee who now sleeps at the abandoned school with his wife and children, says two Syrian refugees living in a room nearby had their food drugged and were kidnapped in the middle of the night.

"Spies came here and took them," said Halim, pointing to a classroom at the end of a corridor that was converted into a bedroom. It was not possible to independently confirm his account, which was repeated by other refugees.

Political and sectarian affiliations are mixed in this undulating region. Church steeples rise from one village and mosque minarets from the next. Some villages are Alawite, the same minority offshoot of Shi'ite Islam as President Assad, and many Lebanese residents openly support him by plastering his image on the side of buildings.

Halim himself is a wanted man. Noticeably on edge, he said that he used to work as a lawyer for the Syrian government but defected and joined the protesters.

"After security saw me at a demonstration, I was informed that I would be arrested and had to flee to Lebanon," he said, looking over his shoulder at his 1-month-old son who he calls 'the little refugee' as he was born in Lebanon. "We are asking the Lebanese government for protection," he added.

UNHCR coordinator Ghafari says he has received many unofficial reports on the two kidnapped Syrians, but is unable to comment on individual cases. "We are getting feedback that (the Syrian refugees) are concerned that someone will follow them into Lebanon," he said.

On September 15th, the Lebanese army said a group of Syrian soldiers crossed 200 metres into Lebanese territory while pursing fleeing Syrians. It said the Syrians returned to their side of the frontier but kept firing into Lebanon.

Lebanese residents who live on border told Reuters that Syrian refugees used to stay with them, but have since fled deeper into the mountains fearing they will be captured during cross-border raids.