The Syrian Observatory for Human Rights, which monitors violence in the country, said the group lost 70 of its fighters in the attacks in the eastern and northern parts of the country. 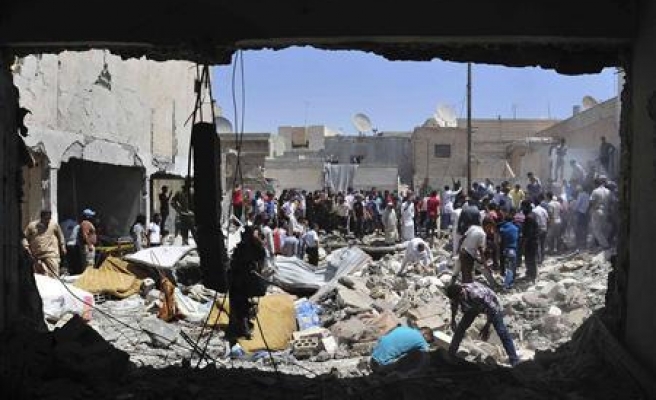 Hundreds of residents fled Syria's northern city of Raqqa after U.S. warplanes struck positions held by ISIL (IS) militants in the city, two witnesses there said on Tuesday.

"There is an exodus out of Raqqa as we speak. It started in the early hours of the day after the strikes. People are fleeing towards the countryside," one resident who goes by the name of Abo Mohamad told Reuters by telephone.

The U.S.-led coalition has carried out at least twenty strikes inside Raqqa province, a stronghold of the ISIL group.

The attacks, which took place in the early hours of Tuesday, hit several buildings and military bases occupied by IS in the province, including the 93rd Brigade and Tabqa military airport, which the group seized last month, as well as the main administrative building in the city.

The two-storey building, which lies in a densely populated area in the city centre, was used as an office by the group, which had turned its basement into a prison.

The fate of prisoners was not immediately clear.

"In the city itself, the destruction is not visible. You can barely notice it. Besides, the only thing that was damaged in the attack was the administrative building but it was not completely destroyed," Abo Mohamad said.

Electricity in the city was cut off, residents said. Shops and markets were closed and the streets were empty except for fleeing residents packed in cars carrying a few belongings.

Residents in the city said the hardline IS fighters had banned people from approaching the bombed building, making it difficult to assess the losses.

"I do not think they suffered major losses because they have already taken precautions and the building was operated with minimum staff," Abo Mohamad said.

The group had gone underground since U.S. President Barack Obama signalled he would strike in Syria. The group had largely evacuated the buildings it was using as offices and moved families of fighters out of the city.

The Syrian Observatory for Human Rights, which monitors violence in the country, said the group lost 70 of its fighters in the attacks in the eastern and northern parts of the country.

Only one was killed in the air raid on the administrative building.

Several hundred fighters who were deployed in the streets, controlling traffic and handling security had now disappeared, Abo Mohamad said.

"There is no life in the city now. Those who stayed here are just waiting for the second chapter, waiting to see what will happen next."