Rouhani has no doubt about Holocaust

Rouhani said that the Nazis committed a "reprehensible" crime against the Jewish people. 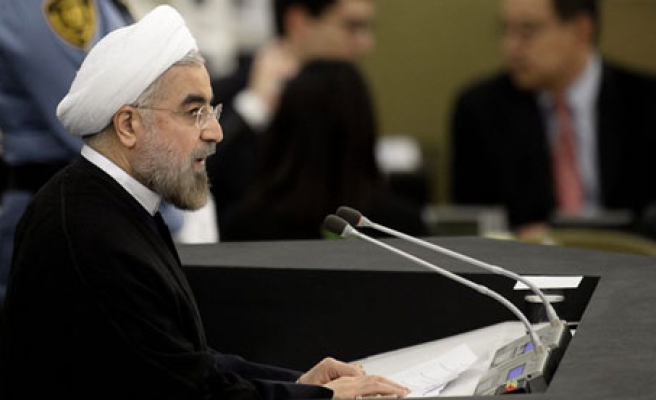 Iranian President Hassan Rouhani said on Tuesday that the Nazis committed a "reprehensible" crime against the Jewish people, when he was asked in a television interview whether he accepted that the Holocaust occurred.

"I am not a historian and when it comes to speaking of the dimensions of the Holocaust it is the historians that should reflect," Rouhani told CNN during a visit to New York where he spoke to theUnited Nations General Assembly.

"But in general I can tell you that any crime that happens in history against humanity, including the crime the Nazis created towards the Jews, is reprehensible and condemnable," he said, according to CNN's tranlation of his comments.

Israeli officials had sharply criticized Rouhani, a moderate cleric who has made diplomatic overtures to the West, for failing to renounce rhetoric by his hardline predecessor, Mahmoud Ahmadinejad, that expressed doubt about the Holocaust.

Announcing that he has listened carefully what US President Barack Obama had said at the UN General Assembly, Iran’s new President Hassan Rouhani said they “can arrive at a framework” to manage their differences.

Rouhani said Iran’s national interests “make it imperative” to remove “any and all reasonable concerns about Iran's peaceful nuclear program.”

Rouhani repeated that nuclear weapons and other weapons of mass destruction (WMD) “have no place in Iran's security and defense doctrine” as such weapons would contradict Iran’s “fundamental religious and ethical convictions.”

“I declare here, openly and unambiguously, that, notwithstanding the positions of others, this has been, and will always be, the objective of the Islamic Republic of Iran,” Rouhani said from the podium of the 68th UN General Assembly (UNGA) in his first ever presidential address at the international organization.

“Of course, we expect to hear a consistent voice from Washington,” Rouhani added.

The Iranian president also stressed that “equal footing, mutual respect, and the recognized principles of international law” should be the basis to govern Iran’s “interactions” with the West.

Saying that “Iran seeks to resolve problems, not to create them,” Rouhani address his county's nuclear dossier by explaining that the “acceptance of the inalienable right of Iran constitutes the best and the easiest way of resolving this issue.”

“This is not political rhetoric,” he added.

Rouhani explained that it was rather based on a “profound recognition of the state of technology in Iran,” as well as a global political environment and “the end of the era of zero-sum games.”

However, he underlined that "acceptance of and respect for the implementation of the right to enrichment inside Iran and enjoyment of other related nuclear rights, provides the only path towards achieving the first objective.”

He also declared that nuclear knowledge in Iran has been already domesticated and the nuclear technology, inclusive of enrichment, has “already reached industrial scale.”

“It is, therefore, an illusion, and extremely unrealistic, to presume that the peaceful nature of the nuclear program of Iran could be ensured through impeding the program via illegitimate pressures,” Rouhani clearly warned at the United Nations.

No military solution for Syria

Regarding the situation in Syria, the Iranian president criticized "regional and international actors” who “helped to militarize the situation through infusion of arms and intelligence into the country and active support of extremist groups.”

Tehran, he conveyed, is of the belief that there is no military solution to the Syrian crisis.

The common objective of the international community “should be a quick end to the killing of the innocent,” the Iranian President stated, adding his government is welcoming Syria's acceptance of the Chemical Weapons Convention.

He also warned that “the access by extremist terrorist groups to such weapons is the greatest danger to the region that must be considered in any disarmament plan.”

He expressed that Iran also believes that “the illegitimate and ineffective threat to use, or the actual use of force, will only lead to further exacerbation of the violence and crisis in the region.”

Rouhani also mentioned that apartheid continues to be practiced against the people of Palestine, calling it “nothing less than structural violence.”

Palestine is under occupation and the basic rights of the Palestinians are tragically violated, as they are deprived of the right of return and access to their homes, birthplace and homeland, said the Iranian president.

“Apartheid as a concept can hardly describe the crimes and the institutionalized aggression against the innocent Palestinian people”, Hassan Rouhani said.

In a more philosophical than political manner Rouhani also explained that ignoring differences between societies and “globalizing Western values as universal ones represent another manifestation of conceptual mindset.”

He noted that such biases indicate that the "reflection of the same cognitive model is the persistence of Cold War mentality and bi-polar division of the world” into "superior us" and "inferior others."

"Shia-phobia” was among the fears and phobia, such as Islamophobia, which are active at the global stage, Rouhani expressed.