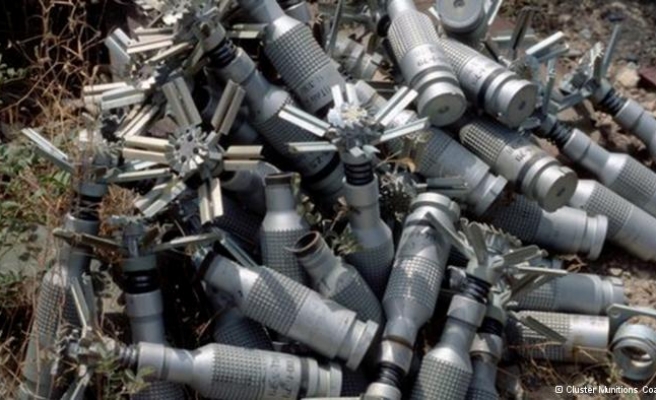 A Geneva-based non-governmental organization has accused Russia of providing the Syrian regime with new types of cluster bombs that end up killing large numbers of civilians.

"As of yet it is impossible to determine conclusively whether the new type of cluster bombs that are appearing in Syria are being used by Russia or Syria, but it is clear that [even] if Russia is not using them directly, they are providing them," Cluster Munition Coalition (CCMC) Director Megan Burke told Anadolu Agency on Tuesday.

Burke said that his organization, which is a global civil society campaign working to eradicate cluster munitions, also sent a letter to Russian President Vladimir Putin on Oct. 2, urging Russia to not use cluster munitions on the grounds that such weapons killed people indiscriminately and had a disproportionate impact on civilians.

"It is worth noting that in the last year Russia added its voice to that of dozens of states which expressed concern at cluster munition use in Sudan and Ukraine.

“This would indicate Russia's support for the view that cluster munitions are an unacceptable weapon to be used in modern warfare and thus all the more reason why they should stop either using or supplying this weapons as part of the offensive in Syria," Burke said.

He called on all sides to stop using such weapons immediately. “Use by either actor is unacceptable and the people of Syria have already suffered too much," he said.

There were about 2,000 casualties from cluster munition attacks and unexploded sub-munitions in Syria from 2012 until the end of 2014, according to data collected by the Cluster Munition Coalition.

An international treaty, Convention on Cluster Munitions, prohibits the production, transfer, and use of the deadly weapon. Neither Russia nor Syria is among the signatories of the treaty, which entered into force in 2010.

Cluster munitions can house hundreds of smaller sub-munitions including grenades, bomblets and mines. They can be fired by artillery systems or dropped by aircraft, and scattered over a wide area.

Like traditional land mines, they pose a threat for years after the conclusion of an armed conflict because their sub-munitions often fail to explode on deployment.