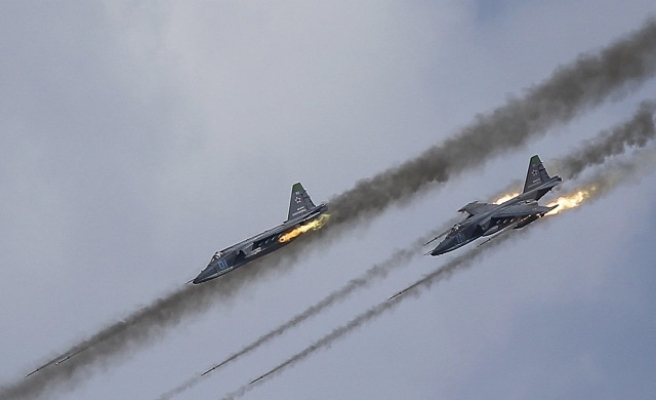 "From the Hmeimim air base, the crews of Su-34, Su-24M and Su-25SM warplanes carried out 41 sorties against 40 targets of the ISIL's terrorist infrastructure in Aleppo, Idlib, Latakia, Hama and Deir Ezzor," said a ministry spokesman.

In the vicinity of the city of Aleppo, Russian bombers destroyed facilities used by fighters to make explosive devices and car bombs, spokesman Igor Konashenkov said in a statement.

"They were intended to be used to carry out terror acts in Syrian cities and settlements as well as during attacks on the positions of government troops," he added.

In the area of Hreitan in Aleppo province, a Russian aircraft destroyed an ammunition depot that belonged to ISIL.

Russian warplanes also hit a training camp in the mountains of Idlib province, which was "destroyed," Konashenko said.

A training camp in the same area was also destroyed, while in Hama and Latakia provinces Russian bombers eliminated ammunition depots.

Strikes also destroyed a command post of a "large ISIL group" in the vicinity of Deir Ezzor city, he claimed.

In late September, Moscow launched a bombing campaign in Syria, saying it needed to target ISIL fighters before they cross into Russia, which has a large Muslim population.

The US and its allies say the majority of Russian strikes have not hit ISIL but instead targeted opposition groups fighting Moscow's long-time ally President Bashar al-Assad as the Kremlin seeks to shore up the strongman's regime.