Russia says no deal reached with Saudi on Syria

"Putin did not discuss a deal," Ushakov told reporters. "No specific questions on developing military cooperation were discussed." 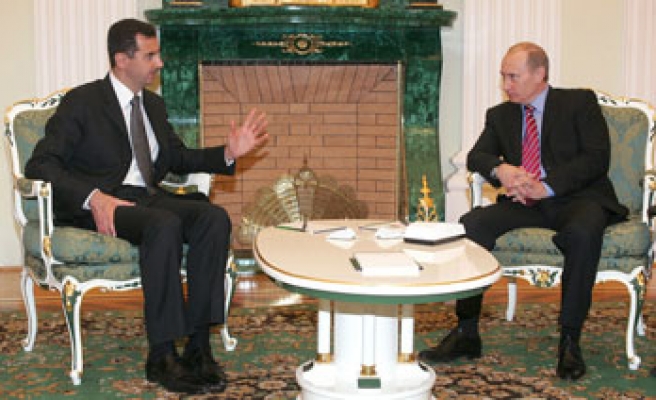 Russian President Vladimir Putin has not made an agreement with Saudi Arabia to scale back support for Syrian President Bashar al-Assad in exchange for economic incentives including an arms deal, the Kremlin said on Friday.

Commenting on a Reuters report that Saudi intelligence chief Prince Bandar made the proposal to Putin at talks last week in Moscow, Putin's foreign policy adviser, Yuri Ushakov, said no deal had been discussed in detail.

He also said no specifics about military cooperation had been discussed but did not issue a denial that the broad outlines of a proposal had been presented to Putin.

"Putin did not discuss a deal," Ushakov told reporters. "No specific questions on developing military cooperation were discussed."

Suggesting the meeting had been short on detail, he said: "It was a very rich and interesting meeting that was of a philosophical character."

Prince Bandar and Putin "demonstrated a similar amount of concern" about the conflict in Syria, he said.

Russia has supported Assad with arms and diplomatic cover throughout the war and any change inMoscow's stance would remove a major obstacle to action on Syria by the United Nations Security Council.

Syrian opposition sources close to Saudi Arabia said Prince Bandar offered to buy up to $15 billion of Russian weapons as well as ensuring that Gulf gas would not threaten Russia's position as a main gas supplier to Europe.

In return, Saudi Arabia wanted Moscow to ease its strong support of Assad and agree not to block any future Security Council Resolution on Syria, they said.

A Gulf source familiar with the matter also said that Prince Bandar offered to buy large quantities of arms from Russia, but that no cash amount was specified in the talks.