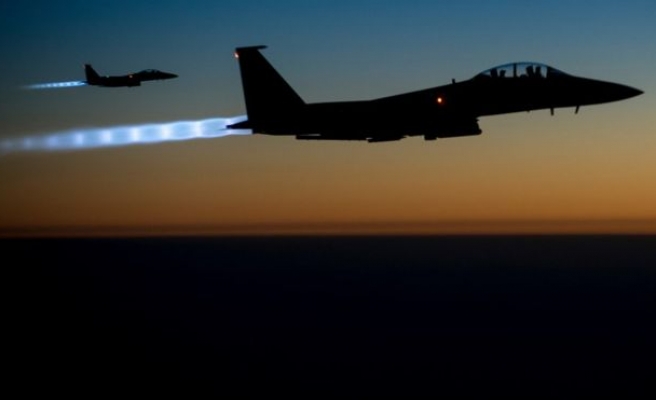 Russian bombing raids against what Moscow says are ISIL targets went into their fifth day Sunday despite criticism from Washington and its allies that the military action may be strengthening the ISIL.

Putin, who met the leaders of France and Germany in Paris on Friday, had "expressed a lively interest in the subject and asked what the difference between the moderate opposition and the immoderate opposition is," Dmitry Peskov said on television late Saturday.

"So far, no one really has managed to explain what the moderate opposition is."

Washington accuses Russia of seeking to buttress Syria's Bashar al-Assad blamed for unleashing a conflict that has killed more than 240,000 people over the past four years and making little distinction between Western-backed moderate opposition and ISIL fighters.

But Moscow is keen to turn the tables on Washington, suggesting it is Washington and its allies that often hit the wrong targets.

"When the conversation has turned to this, our president remembered," Peskov said of the Paris talks.

"He also remembered the wedding in Yemen and so on," Peskov added, referring to more than 130 people killed during the recent bombing of a wedding for which the Saudi-led coalition denied responsibility.

An apparent U.S. air strike on an Afghan hospital that killed 19 people on Saturday is also expected to play into the Kremlin's hands.

U.S. President Barack Obama called Russia's intervention a "recipe for disaster" but pledged Washington would not be drawn into a proxy war.

But some in Europe say Russia has to have a greater role in the plan to eradicate the armed group.

"It is obvious that if we are not successfully making peace in Syria, then the migratory pressure will not decrease in Europe," Hungary's foreign minister Peter Szijjarto told the UN General Assembly.

Putin has said Moscow needs to hunt down ISIL militants before they cross into Russia, which has a large Muslim population.

On Sunday, the Syrian Observatory for Human Rights said that "warplanes, believed to be Russian, carried out many strikes against two villages in the north of Homs province."

One person was killed and others injured, it said.

The areas hit by the strikes, are largely controlled by rebels, the Al-Nusra Front and other armed groups, the observatory said.

On Saturday, Moscow sounded an upbeat note, praising the results of the first three days of strikes.

"Panic and desertion have started in their ranks," a senior officer of the General Staff, Colonel General Andrei Kartapolov said.

"Some 600 mercenaries have abandoned their positions and are trying to find their way into Europe," he said, adding that Moscow would ramp up the aerial campaign.

Russia also said Saturday that, over the previous 24 hours, fighter jets had destroyed a number of ISIL targets and dropped a concrete busting BETAB-500 bomb on a command post in the area of Raqa.

The Observatory said Saturday that six civilians, including a woman and her four daughters, were killed in Jabal al-Zawiya, Idlib province, in the strikes thought to have been carried out by Russian warplanes.

But raids ordered by Moscow have also hit areas controlled by moderate groups and even prompted a claim by U.S. Senator John McCain that Russian jets had killed rebel soldiers trained and funded by the CIA.

Kartapolov of the General Staff said that Russia had recommended that Washington pull out "those valuable employees who were trained at the expense of American taxpayers."

Russia said its strikes had destroyed ISIL positions in northern Aleppo province, Idlib province and in Hama in central Syria.

The Observatory says Russian strikes have killed several civilians and wounded doctors in a raid on a hospital in Hama.