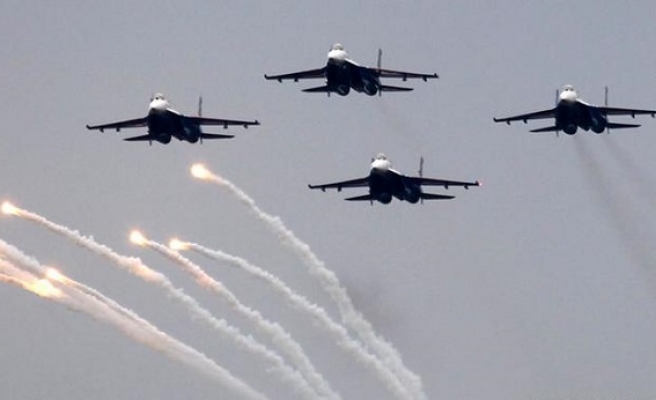 Russian warplanes have carried out "intense" new strikes in two Syrian provinces, with regime forces launching a simultaneous ground attack on rebels for the first time, a monitor said Wednesday.

The Britain-based group had no immediate tolls from the strikes overnight and in the early hours of Wednesday which were "more intense than usual".

"For the first time the strikes were accompanied by fighting on the ground between regime forces and rebels," said Observatory director Rami Abdel Rahman.

He said the clashes took place in Hama province and began when regime forces including pro-government militias launched an attack on rebels as Russian planes carried out air strikes.

"There was also heavy use of surface-to-surface shelling by the regime in the province," he added.

He said the regime forces had not yet been able to advance and that the Army of Conquest alliance, the powerful grouping that includes Al-Qaeda affiliate Al-Nusra Front and controls neighbouring Idlib province, was sending reinforcements to counter the assault.

The group said the evening raids had targeted a weapons depot but that the Wednesday strikes on the Daret Ezza area killed two women and a child.

Syrian state television meanwhile reported Russian planes in coordination with Syrian aircraft had carried out strikes against ISIL group positions in Aleppo province without specifying when.

Hama, Idlib and Aleppo provinces have already been targeted by Russian warplanes in an aerial campaign that began a week ago and which Moscow says targets ISIL.

Syrian rebels and their backers accuse Russia of targeting a whole range of opposition forces, including moderate and Islamist rebels, not only ISIL fighters.

On Tuesday night, Russia's defence ministry said it had carried out air strikes on 12 ISIL targets throughout the day, including around the eastern city of Deir Ezzor and in Damascus, Idlib and Latakia provinces.