Annan is widely expected in Moscow in the next few days although details of his visit have not been announced. 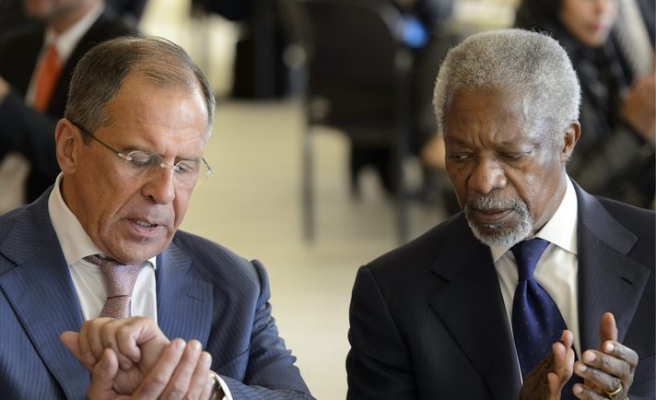 Russia urged U.N. special envoy Kofi Annan on Friday to work more closely with the Syrian opposition and a Foreign Ministry source said it would push the idea at talks with Annan in Moscow on Monday.

Russia has repeatedly defended President Bashar al-Assad at the U.N. Security Council since the start of the uprising in Syria 16 months ago, but held talks with the Syrian opposition this week at which it was urged to do more to end the violence.

A ministry source told RIA news agency that Annan would discuss the crisis with Foreign Minister Sergei Lavrov in Moscow on Monday, although neither Russia nor the envoy have announced the visit.

"To be honest, we do not see our partners being as ready (as Russia) to work with the opposition, and Kofi Annan is the main mediator of this process," Deputy Foreign Minister Gennady Gatilov was quoted as saying by Interfax.

"Unfortunately, so far we don't see any practical results from his and his team's contact with the opposition," he said.

Annan's second visit to Russia since his appointment as special envoy for Syria follows Lavrov's meetings in Moscow with week with two delegations of Syrian opposition leaders.

No mention was made of Annan holding talks on Monday with President Vladimir Putin or Prime Minister Dmitry Medvedev.

Russia has sent what foreign diplomats say are conflicting signals that could point to a shifting position over Syria as it seeks to ensure it keeps a foothold in the pivotal Middle East country if its ally Assad goes.

Moscow said on Thursday it would not agree to a threat of sanctions to end the conflict in Syria as the U.N. Security Council began negotiations on a resolution to extend a monitoring mission in Syria.

"A peace enforcement operation is a forced measure. Any measures that could be taken without the government's consent are out of the question," Interfax quoted Gatilov as saying.

In a further sign of Russia's determination to keep a foothold in the region if Assad departs, military sources said Russian warships had left this week for Syria, where Moscow has a naval maintenance facility.

But Gatilov's call for Annan to work more with the Syrian opposition, and the increased contacts with Assad's opponents, suggested Russia is trying to take a more balanced approach and may be considering ways to facilitate a political transition.

A Russian arms trade official was also quoted this week as saying Moscow would deliver no more weapons to Assad while the fighting continued.

Both Syrian delegations that visited Moscow this week criticised international efforts to resolve the crisis.

The opposition has made starting talks with Assad's government conditional on him relinquishing power. But Russia - long a big arms supplier to Damascus and Assad's staunchest supporter among the big powers - has said this is unacceptable and not part of the international peace plan laid out by Annan.

Moscow had previously hosted several Syrian opposition groups, but failed to find common ground with any of them after