Cluster bombs, banned by over 100 countries are being used by the Russian army on civilians in Syria. 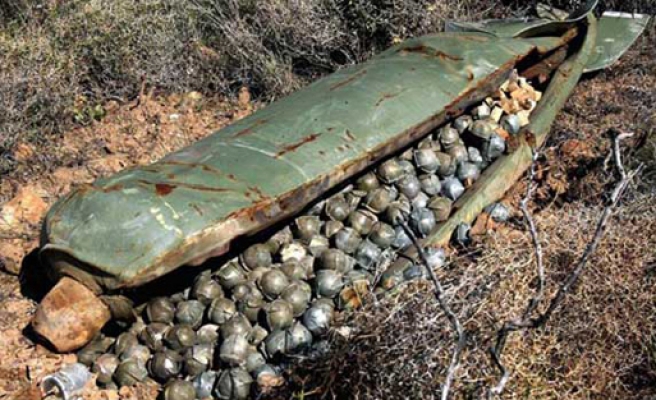 Sources inside Syria are saying that Russian warplanes  appear to be dropping banned cluster bombs on civilian targets in Homs and other areas where airstrikes have been conducted in the last few days according to a report in commdignews.

Video of the attacks show the dropping of the bombs to be both largely inaccurate and indiscriminate, using “dumb” unguided gravity bombs with targeting technology that is at least 30 years old.

The video appears to show a weakness in Russian technology compared to American munitions, which are laser-guided and highly accurate, and an inability of the Russian air force to display capabilities in bombing accuracy that have implications for Russian military tactics elsewhere.

As a tactical practicality, Russia continues to rely on unguided weapons for air-to-ground attacks and has failed to  invest the billions the US has in precision munitions and aerial sensors to guide them.

The Center for Analysis of Strategies and Tactics, a Moscow think tank, has openly criticized the Kremlin for its “strange” and “unacceptable” failure to develop satellite-guided bombs and new long-range precision air-to ground missile systems, as well as the targeting systems to direct them.

The use of cluster bombs, which has been banned by over 100 countries,  is considered a war crime for its indiscriminate nature and impact on civilians.