Russian plane broke up 'in air' over Sinai

Russian investigator says it’s ‘too early’ to state reason for Saturday plane crash in Egypt’s Sinai, which killed all 224 people aboard 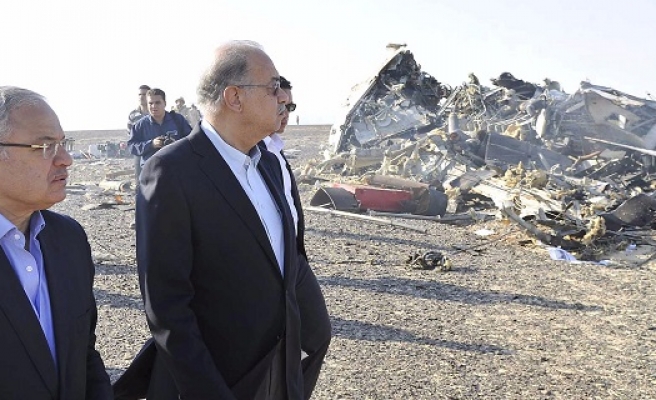 A Russian passenger plane that crashed in Egypt’s Sinai Peninsula on Saturday -- killing everyone on board -- broke up “in the air”, a Russian investigator has said.

“The disintegration happened in the air; fragments [of the plane] are strewn over a large area,” Viktor Sorochenko, a senior official with Russia's Interstate Aviation Committee who is currently in Cairo, was quoted as saying by Russia’s RIA Novosti news agency.

Sorochenko went on to say, however, that it was “too early” to state the exact cause of the crash.

On Saturday, a Russian Airbus A321 aircraft crashed in Egypt’s Sinai Peninsula shortly after taking off from the Red Sea resort of Sharm el-Sheikh, killing all 224 people on board.

Egyptian officials, for their part, have suggested the crash may have been caused by a technical failure.

Investigators, meanwhile, have since recovered the plane’s two black boxes and combed the crash site looking for clues as to the tragedy’s causes.

On Sunday, Egyptian President Abdel-Fattah al-Sisi urged patience until the causes of the crash were determined.

“In such cases, leave it to specialists to determine the cause of the crash, which remains the subject of an extensive and complex technical study,” he said.

Sisi’s appeal came after a Sinai-based militant group -- said to be linked to the extremist Daesh organization -- reportedly claimed responsibility for downing the plane, allegedly in response to recent Russian military intervention in Syria.

Late Sunday, the bodies of 179 Russian crash victims were flown home from Cairo.

The bodies were flown to the Russian city of St. Petersburg, a source at Cairo International Airport told Anadolu Agency.

The crash has since prompted several airlines to suspend flights over the volatile Sinai Peninsula until the exact causes of the crash have been determined.

The Russian media, meanwhile, has reported that the crashed Airbus A321 had sustained some structural damage when making a landing in Cairo 14 years ago.

According to Russian media reports, the aircraft suffered a so-called “tail strike” -- which occurs when the rear section of an aircraft strikes the runway on landing -- while touching down at Cairo International Airport in November of 2001.

At the time, the plane had been operated by Middle East Airlines. Since then, it has been operated by Turkey’s Onur Air, Saudi Arabian Airlines and -- most recently -- Russian carrier Metrojet.

The last plane crash seen in Egypt was in 2004, when an Egyptian charter plane crashed into the Red Sea shortly after taking off from Sharm el-Sheikh en route to Paris, killing all 148 people on board.