Although Sisi has not officially declared his candidacy yet, Putin wished Sisi luck in his campaign to become president. 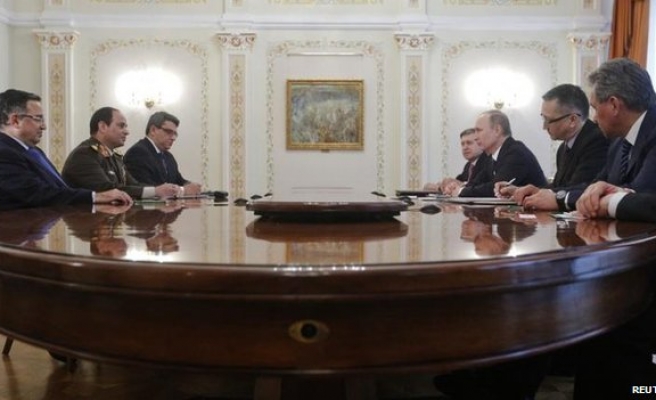 Russian president Vladimir Putin has said that he would support Field Marshal Abdel Fattah al-Sisi should he decide to run to be the next president of Egypt.

Although Sisi has not officially declared his candidacy yet, Putin wished Sisi luck in his campaign to become president.

"We are closely watching the situation in your country. We are interested in Egypt being a strong and stable country," Shoigu reportedly told Sisi, according to Russia's Interfax news agency.

Shoigu praised Sisi's so called "fight against terrorism" and added that Russia was interested in developing closer military-technical cooperation with Egypt.

It is highly speculated that Sisi arrived in Russia to sign a possible arms deal.

Sisi placed himself in the positio of defense minister in Egypt's military-back interim government after the army chief ousted the elected president Mohamed Morsi on July 3, 2013 in a coup.

Following the coup hundreds of anti-coup protesters were killed at the hands of Sisi's army, including a massacre of over 600 people in Cairo's Rabia al-Adawiyya Square in August.

Growing unrest in Egypt since the coup has seen episodes of violence across the country, especially in Sinai where anti-coup groups have taken up arms against the interim government.

The opposition groups, including the Muslim Brotherhood from which Morsi hailed, have been declared as terrorist organizations, with members facing arrest and prosecution.

Nonetheless, Sisi enjoys the support of the pro-military sector of Egyptian society, and is expected to enter the upcoming presidency race as a favorite to take office.