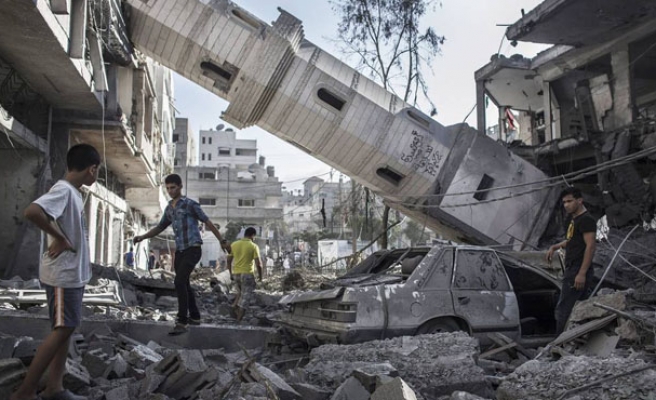 Saudi Arabia told Israel on Tuesday that it must reach a peace agreement with the Palestinians if it is to survive as a nation, and criticised Muslims for being divided and failing to stop the Jewish state attacking its Arab neighbours.

"Israel has to realize that peace is the only solution for its survival," Saudi Foreign Minister Prince Saud al-Faisal told a meeting of the Organisation of Islamic Cooperation (OIC), the world's largest Muslim body, on the situation in the Gaza Strip.

"As we see, Israel does not shy away from taking its terror to any level, with total disregard to any laws, rules, religious edicts or humanitarian considerations to achieve its goals.

"Its only objective is to uproot the Palestinian existence wherever it is," Prince Saud told the meeting in Jeddah, attended by Palestinian Prime Minister Rami Hamdallah and ministers from the 56-member OIC.

Saudi Arabia, which regards itself as a leader of the Sunni Muslim world, has played only a background role in the diplomacy to end the fighting in Gaza, leaving its ally Egypt as the main Arab player pursuing a ceasefire - in its second day on Tuesday.

The kingdom's policy towards Gaza is complicated by its mistrust of the territory's ruling Hamas, a movement with close ideological and political links to the Muslim Brotherhood, which Riyadh regards as a terrorist organisation.

Gaza hospital officials say 1,938 Palestinians, most of them civilians, have been killed since Israel launched a military campaign on July 8. Israel has lost 64 soldiers and three civilians.

Efforts to negotiate a permanent peace deal have failed due to differences over the borders of a Palestinian state, the fate of Arab East Jerusalem and the future of displaced Palestinians and their descendents.

Arab states, including Saudi Arabia, say they are willing to make peace with Israel after it withdraws from all lands it occupied in the 1967 Middle east war. Some Hamas leaders also have said in recent years it could live peacefully alongside Israel if Palestinians get back land they lost in 1967.

NO RIGHT TO SELF-DEFENCE

"I don't think it's fair to equate the actions of Hamas and Israel, either in scale or in substance. How can you say that Israel has a right to defend itself when it is the occupier and you do not give the same right to Hamas?"

"Would it have been possible for Israel to carry out an aggression after another, had the Islamic nation been united?" Prince Saud said.

"What tempts Israel to commit its continuous crimes against the Palestinian people and Muslims as a whole is the weakness it sees in the Muslim nation due to fragmentation and divisions and the spread of sedition within it."

it's a pity the suadis talk against muslims but they are the one want to abolish the elected hamas group(b/se of the assumption that hamas is integrated part of muslim brotherhood) by cooperating with isreali and other areb countries and now after supporting isreali war in gaza it critisez muslims over failing to stop isreali.i don't see any effort this evil country want to stop isreali attack

The Saudi statement is nothing short of contemptible hypocracy as the Saudi regime betrays the Palestinians by collaborating with the Zionist regime using them as proxies in their sectarian struggle with Iran.The Saudi's work hand in glove with US and other imperialists to fund IS (which it has lost control of) to destroy Syria in order to enforce a Wahibist hegemony in the region. A reprehensible, corrupt, kleptocracy that is a willing servant of imperialism.